It's Coming! Today starts the last Transit of Venus in this century - next in 2117. Don't miss it!

This transit only takes place on the very rare occasions when the Sun, Venus and Earth are almost exactly in line.

In average, it only happens every 80 years. Before the last transit on June 8th 2004, no living person had seen a transit of Venus - the previous one was on December 6th, 1882.


In astronomy, a 'transit' occurs when a smaller body passes in front of a larger one. A 'Transit of Venus' happens when Venus is seen in silhouette against the bright face of the Sun.

The transit which occurs when Venus passes directly between the Earth and the Sun was last recorded in 2004. There won't be another one until the year 2117, with not many of us likely to be able to witness then.

And before it happens again, the Earth will change beyond recognition. It won't happen again until December 2117.

This Tuesday/Wednesday, June 5/6th, 2012, Venus will transit the face of the Sun in an event of both historical and observational importance.


The 6 June transit will start at approximately 00:04 Central European Time (CET). It will then take about 20 minutes from the point when Venus first bears upon the disk of the Sun.


The first contact, until the planet is fully silhouetted, the second contact. The planet will then take a curved path across the northern part of the Sun, and the mid-point of the transit will occur at around 03:30 CET.

Of course you don't want to miss it all! Neither your students in Sciences curriculum or not!

The best places of the world to watch predicted to last seven hours, are  Easrern Asia and Australia, the south Pacific and the north-western parts of North America.

If you live there, you are privilegious people, you and your students!

In Europe, we only be able to watch the later stages. But travel is not required.

Check on map where will be visible → http://goo.gl/iSDsT

NEVER look directly at the Sun, with or without a telescope or pair of binoculars, without using a safe solar filter. To do is very dangerous and is likely to result in permanent blindness.

For safe viewing of the transit,  experts from the Royal Astrnomical Society (RAS) advise the same rules apply as those for observing a partial or annular eclipse of the Sun. Eclipse viewing glasses can be used, as long as they are undamaged and observing is limited to a few minutes at a time. Note that they must NOT be used with binoculars or a telescope. For an enlarged view, an image of the Sun can be projected onto a screen by a small telescope. Pinhole projection, however, will not produce a sharp enough image to show Venus clearly.

To safely watch the transit, experts from the Royal Astronomical Society (RAS) advise using special eclipse-viewing glasses, so long as long as they are undamaged and observing is limited to a few minutes at a time. 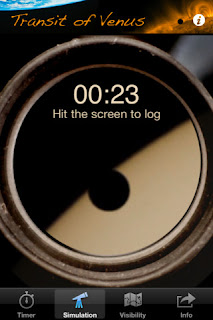 New technologies, like the free Transit of Venus phone app, will allow individuals to send their observations of the 2012 transit of Venus to a global experiment to measure the size of the solar system.

Join this unique effort, spearheaded by the non-profit Astronomers Without Borders, as a supporter and a participant.


Ipads ans smartphones on the desk! A wonderful animation can be watched on BBC Venus to put on Sun Spectacular

Students were invited to watch live on their devices at home or joining sky watchers with family or friends.

In classroom, they are invited to use their devices watching BBC animation or NASA videos for an open debate on the subject with colleagues and tutoring by educators.

Languages: It is very important to guide students writing a good school report for Sciences curricula.

But as an educator, you know how students love science-fiction literature! You can not miss this opportunity!

It would be nice to read some Jules Verne excerpts. For information and activities read here.

Invite your students to write some sci-fic stories about this awesome event, individually or in small groups.

Ask your colleague of Arts curriculum to invite students to draw some illustrations that can enrich the creative sci-fic stories.

My students were invited to write a post on their environmental blogs. Please read here and here

Students can join astronomers and sky watchers at national observatories of Astronomy, observing the transit of Venus and snap some photos to explore in the classroom. 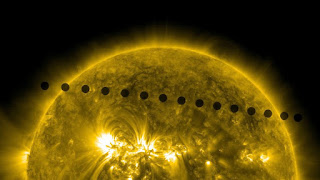 
Dr Thomas Widemann of the Observatoire de Paris, one of the partner institutions, describes the transit of Venus as "a unique opportunity to closely observe an Earth-like planet passing in front of a Sun-like sta".

We are all so excited!

Schools : Transit of Venus! Prepare your students by G-Souto is licensed under a Creative Commons Attribution-NonCommercial-NoDerivatives 4.0 International License.

Some important links for educators: