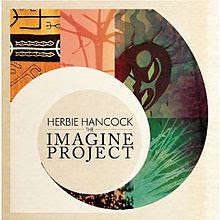 "The Imagine Project is a 21st century Love-In, complete with psychedelia (Dave Matthews singing The Beatles's "Tomorrow Never Knows") and some groovy, good-time peace and love (singer and slide guitarist Derek Trucks, stretching out on "Space Captain," made famous by Joe Cocker). Peter Gabriel's gentle "Don't Give Up" retains its writer's world interests in a duet partnering pop megastar Pink and R&B singer John Legend, but with some tasty contributions from guitarist "

December, 9th I have been at Casa da Musica to listen Herbie Hancock. The composer and keyboardist presented his musical project of peace, inspired by John Lennon's song "Imagine".

"It's a peace proposal"
Herbie Hancock

Collaborating with legendary trumpeter on the early nexus of jazz and rock, Hancock is considered one of the pioneers in the integration of funk, soul, hip-hop and synthesizer (electronic music) in jazz.

"The Imagine Project shall remain at its core, entertainment content that is creatively and emotionally deeply fulfulling."

Famous songs like 'Imagine', 'Don't give up', 'Times are a changing' and others have been reinvented with talent by the amazing musicians.

It was unbelievable  to have all those international musicians on stage that night.

But the impressive jazz musicians on stage in front of us, had a wonderful performance in the art of improvisation and contact to the audience!

Here the beautiful theme of Kate Bush featured by Pink and John Legend of the album "The Imagine Project".

(musical break, in a sunny but freezing weekend)