Schools : The Geminid shower ? Let's talk about & much more ! 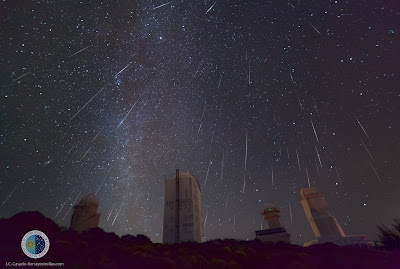 
The Geminid Meteor Shower is one of the best (if not the best) meteor shower of the year. Geminid Meteors are bright with a (seasonally festive) greenish hue that leave long lasting dust trails in the sky.

Active now! Year in and year out the Geminids are currently the most dependable meteor shower. Unfortunately, they are active in December when temperatures are often cold and skies cloudy in the northern hemisphere.

Don't forget to talk about it in the classroom. It's lovely! Young students will enjoy it and will understand better the meteor shower.

The Geminids can be annually observed between December 4 and December 17, with its peak activity being around December 14. The shower owes its name to the constellation Gemini from where the meteors seem to emerge from in the sky.

This year it started 7 December. However there will be a nearly full moon in the sky as the Geminids peak on the night of December 13/14.

December's full moon is known as the Cold Moon, though it has many other nicknames by different cultures:  Oak Moon, Moon before Yule, Long Night Moon, Uduvapa Poya, the Karthikai Deepam Moon and the Chang'e Moon. 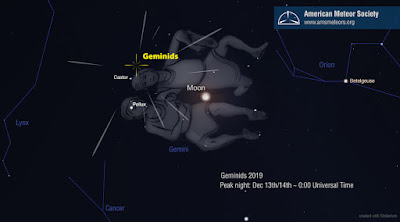 
The Moon will appear full for about three days centered on this time, from Tuesday 12 December evening through Friday morning.

Unfortunately this means that the fainter meteors will be obscured by the bright moonlight and that total counts will be reduced drastically.

Though the Geminid shower is a quite lively producing frequent bright meteors, which should outshine the copious moonlight.

Then is this display worth viewing this year? Certainly! So it may be chilly out, but if you and your students step outside over the next week, you’ll be able to enjoy one of the most active meteor showers of the year!

Instead of seeing 60 or more Geminids per hour one may still be able to count roughly 20 per hour. Is 20 per hour worth viewing on a cold December night? Yes! 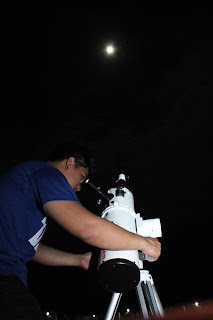 Next 13/14 December, the spectacular Geminid meteor shower will be back with its spectacular show.

But most of us are excited about the Geminids shower. Science teachers and students. They will join sky watchers at an observatory in the town or simply outside.

This time teachers and students are just ending school time before Christmas season. But they will have the time - forget the tests - to watch the sky and sciences curriculum will be enhanced with the awesome event in the sky. 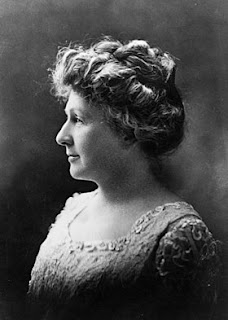 Annie Jump Cannon was a pioneering astronomer responsible for the classification of hundreds of thousands of stars.

She was born on this day, 11 December  1863, in Dover, Delaware. Annie Jump Cannon studied physics and astronomy at Wellesley College and went on to work at Harvard Observatory.

A trailblazer for women in science, she discovered hundreds of variable stars and devised a unique system of classification that became the universal standard, in which she listed hundreds of thousands of stars.

Cannon died in Massachusetts in 1941.

Google celebrated Anna Jump Cannon in 2014 with a Doodle for her 151st birthday.

A pioneer in astronomy, Cannon developed the Harvard Classification Scheme with Edward C. Pickering, which organized and categorized stars based on their temperatures.

It would be interesting to include this women scientist into your lesson to motivate girls to science. 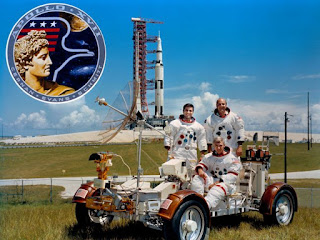 Commander Gene Cernan was the last person to set foot on the lunar surface as he followed the lunar module pilot, Harrison Schmitt, back into the spacecraft on the last day. Ronald Evans, the command module pilot, never got the chance to walk on the moon like his crewmates did, because he had to hang out by himself in lunar orbit.

You see! How many subjects can you as a teacher enhance your sciences lesson! Students will be so excited to learn about.

Time to back to the Geminids meteor shower... 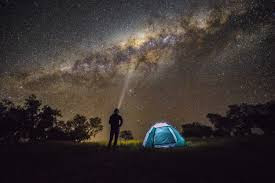 How and when to view?

To best see the Geminids you need to view as close to December 14th as possible.
Like all meteors showers, there are many more faint meteors than bright ones. Eyes that had just stared at the moon or just came outside from indoors will not be able to see these fainter meteors. Say your students to give their eyes time at adjust to the darkness.
There will be periods when little activity is seen and then other periods when meteors are falling constantly.
These periods often last as long as 15 minutes so it is advisable to watch for an hour or more so that students witness several peaks and valleys and get a real feel of the meteor activity.
Invite them to go at the observatory in town for a confortable night of meteor watching. They will be with some interested sky watchers and astronomers from the observatory who will guide during the sky watching.
They can face in any direction as Geminid meteors can be seen in any part of the sky. 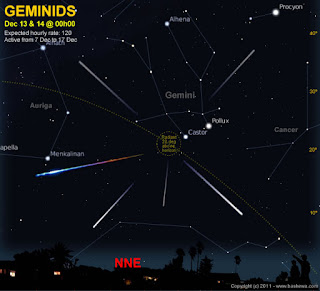 No matter what part of the sky they appear, they will all trace back to the radiant near the bright star known as Castor.
Hey ! Don't forget ! The peak of the Geminid meteor shower will be the night of December 13-14. Unfortunately this means that the fainter meteors will be obscured by the bright moonlight and that total counts will be reduced drastically.But don't give up to watch the sky!The full-moon can obtrude too greatly on the great celestial light show.

Grab those binoculars, dust off that telescope, and join astronomers under the beautiful dark Geminid skies at the observatory at your town!

Hoping you will have great lessons including all these resources!

Schools : The Geminids shower ? Let's talk about & something more ! by G-Souto is licensed under a Creative Commons Attribution-NonCommercial-NoDerivatives 4.0 International License.