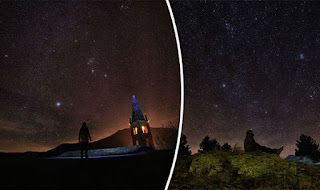 Today the biggest meteor shower of the year is set to put on a shooting-star show tonight when the Geminids streak across the sky - at least in places that won’t be overcast.

The highly anticipated Geminid meteor shower can be seen from both the northern and southern hemispheres, according to NASA, and many of the meteors will be visible to the naked eye.

Some excellent photos of Geminid meteors in 2015 have already been taken. The shower is going on now and it’s expected to be a great one!

From a radiant point in the constellation of the Twins, the annual Geminid meteor shower rain down on planet Earth.  The Geminids makeup helps them penetrate deeper into Earth’s atmosphere than any other meteor, leading to bright, long arcs lasting for as long as two seconds, according to NASA.

Tonight, the Geminds reach their peak and could be quite spectacular. 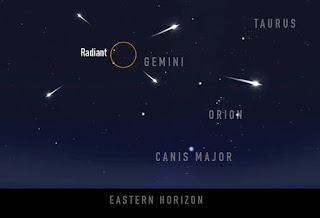 The peak night of the 2015 Geminid meteor shower is December 13 (evening of December 13 until dawn December 14). 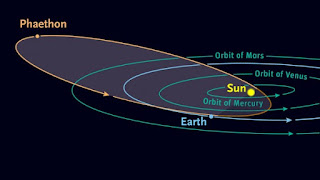 Orbital path of 3200 Phaethon
via skyandtelescope.com

Some information: the Geminids

The  Geminids – so called because the apparent source of their trails is placed in the constellation of Gemini (the Twins). Geminids are pieces of debris from an object called 3200 Phaethon. Long thought to be an asteroid, Phaethon is now classified as an extinct comet.

Basically it is the rocky skeleton of a comet that lost its ice after too many close encounters with the sun. Earth runs into a stream of debris from 3200 Phaethon every year in mid-December, causing meteors to fly from the constellation Gemini. 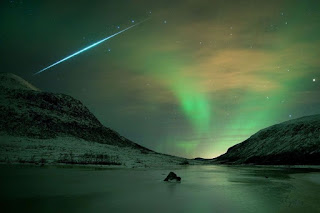 When the Geminids first appeared in the early 19th century, shortly before the U.S. Civil War, the shower was weak and attracted little attention. There was no hint that it would ever become a major display.

The Geminids appear every year in mid-December when Earth passed through a stream of debris from "rock comet" 3200 Phaethon.  Typically more than 100 meteors per hour stream out of the radiant in the constellation Gemini. when the shower peaks on Dec. 13th and 14th. 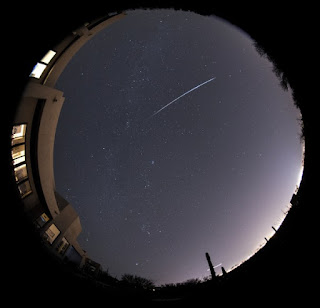 December 2, 2015 at 10:34 p.m. from the Tucson, Arizona foothills
credits: Eliot Herman
http://en.es-static.us/upl/
How to View the Geminids meteor shower

The best opportunity to see the Geminid Meteor shower is during the dark pre-dawn hours of December 14.

For optimal viewing find an open sky – because Geminid meteors come across the sky from many all directions.
Lie on the ground and look straight up into the dark sky. Again, it is important to be far away from artificial lights. Remember, your eyes can take up to thirty minutes to adjust to the darkness, so allow plenty of time for your eyes to adjust.
Be sure to give yourself at least an hour of observing time. It takes about 20 minutes for your eyes to adapt to the dark.
It’s fun to bring along a buddy, says Earth Sky. Then two of you can watch in different directions. When someone sees one, they can call out “meteor!” This technique will let you see more meteors than one person watching alone will see.

Education:
Today, 13 December until dawn December 14) 2015, the awesome Geminid meteor shower will be back with its spectacular show.

Most of us are excited about the Geminids shower. Science teachers and students. Skywatchers as well.

I'm not a science pedagogue, but I love science and all the high technology near science.

Do you remember Catching the Falling Stars, the Perseids last August 2015? Just awesome! A sky full of stars.

The Geminids, along with the August Perseids, are the two most active annual meteor showers. They can always be relied upon to put on a good show, and that is especially true this year, because the moon will be only a few days old, setting early in the evening.

As in 2014, the European teachers and students have end the school time, or are just ending school time before holiday season.

However sciences curriculum can be enhanced with the help of another awesome event in the sky. The Geminids meteor shower. 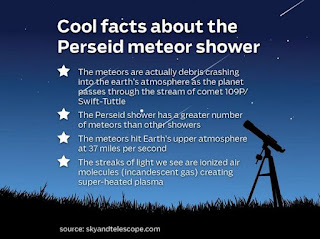 During the Geminids shower skywatching, if you are still at school (if not ask your students via Skype, Facebook, Twitter or Google +) teachers, students can be skywatchers, and at the same time dosome good shots, or videos with iphones, smartphones or tablets. The event will be discussed next lesson before or after Christmas. That will depends where you are living and teaching.

Using the tablets, smartphones, students will need a cable release chord. Luckily they can actually use their iPhone headphones' cable volume button to activate the shutter. And they also need an app designed to take long exposure photos.

Where to view the Geminids :

Sightings are possible around the world but it's good news for Britons because the shower favours observers in the Northern Hemisphere over those in the Southern.
A wide open and dark sky is really important to trace urge path of a meteor as they are not terribly bright. A few can be blazing, but most are about as bright as the average star, so teachers, students are urged to stay away from lights, nearby trees and building.
This year, the peak night could be the night of December 13 (morning of December 14). Try the nights after, too, anywhere from about the evening of December 15.
Your local peak will typically be centered at about 2 a.m. local time, no matter where you are on the globe. That’s because the constellation Gemini – radiant point of the shower – will reach its highest point for the night around 2 a.m. (your local time).
As a general rule, the higher the constellation Gemini climbs into your sky, the more Geminid meteors you’re likely to see.
Tell your students that it is not necessary to look in a particular direction to enjoy a meteor shower – just lay down on the ground and look directly above and they  and you are bound to see some meteors – astronomers suggest looking towards the south to view the Geminids.

Most of all, they must have fun!

Science education : Ready to watch the Geminids shower ? by G-Souto is licensed under a Creative Commons Attribution-NonCommercial-NoDerivatives 4.0 International License.