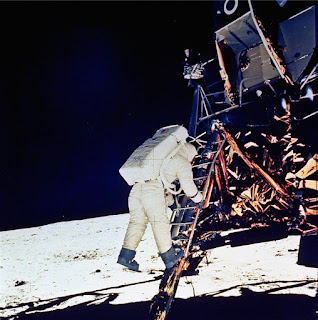 “I think we’re going to the Moon because it’s in the nature of the human being to face challenges. It’s by the nature of his deep inner soul. We’re required to do these things just as salmon swim upstream.”

The primary mission objective was to fulfill a national goal set by President John F. Kennedy on May 25, 1961, to perform a crewed lunar landing and return safely to Earth before the decade was out. 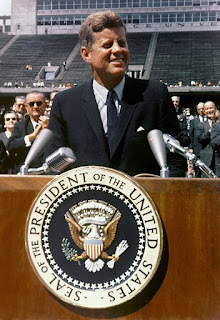 "We choose to go to the Moon"

50 years ago today, on September 12, 1962, President John F. Kennedy delivered one of his best and most inspiring speeches. Arguably, one of the best in the history of the United States, historians say.

The speech resonated widely and is still remembered, although at the time there was disquiet about the cost and value of the Moon-landing effort. Kennedy's goal was realized in July 1969, with the successful Apollo 11 mission. 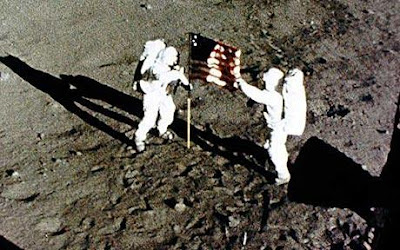 On July 20 1969, Armstrong and Aldrin became the first men to walk on the Moon. The two astronauts spent more than 21 hours on the lunar surface deploying scientific experiments and gathering samples before returning to the orbiting command module, piloted by Collins.

The Moon landings inspired a generation of scientists and engineers and a cultural outpouring - from songs like Space Oddity and Rocket Man to an episode of cult TV series The Simpsons.

A team of some 400,000 people from around the world worked on Project Apollo, mostly factory workers, scientists, and engineers who never left the ground. Within those 400,000 were the mission’s astronauts Neil Armstrong, Edwin “Buzz” Aldrin, and Michael Collins.


Their historic journey began when a Saturn V rocket blasted off from Florida’s Kennedy Space Center on July 16, 1969. After achieving orbit around the moon, the lunar module, known as “the Eagle,” separated for a 13-minute journey to the surface. Meanwhile, astronaut Michael Collins stayed behind in the command module, which would eventually bring all three astronauts back home to Earth.

Fifty years ago, NASA’s Apollo 11 mission changed our world and ideas of what is possible by successfully landing humans on the surface of the Moon⁠ - and bringing them home safely for the first time in history.

The video Doodle celebrates this moment of human achievement by taking us through the journey to the moon and back, narrated by someone with firsthand knowledge of the epic event: former astronaut and Apollo 11 command module pilot Michael Collins.

From October 2018 through December 2022, NASA will mark the 50th anniversary of the Apollo Program that landed a dozen Americans on the moon between July 1969 and December 1972.

NASA unveiled an official logo for use in observing these milestone anniversaries Friday at the Kennedy Center for the Performing Arts in Washington.
The unveiling was part of “NSO Pops: Space, the Next Frontier,” a National Symphony Orchestra celebration of NASA’s 60 years of accomplishment.

This July, in a series of special events, NASA is marking the 50th anniversary of the Apollo Program - the historic effort that sent the first U.S. astronauts into orbit around the Moon in 1968, and landed a dozen astronauts on the lunar surface between 1969 and 1972. 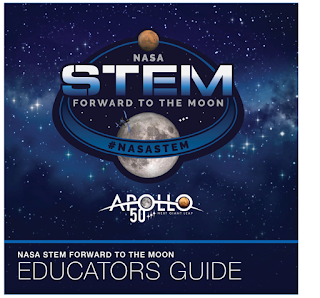 The Moon 2024 Education Guide is published by NASA’s Office of STEM Engagement to accompany the STEM Education segment of the Apollo Anniversary broadcast aired on NASA TV July 19, 2019.

May be used in both formal and informal educational settings.

Target audience : the chosen activities are middle school students in informal educational settings or families in the home setting. 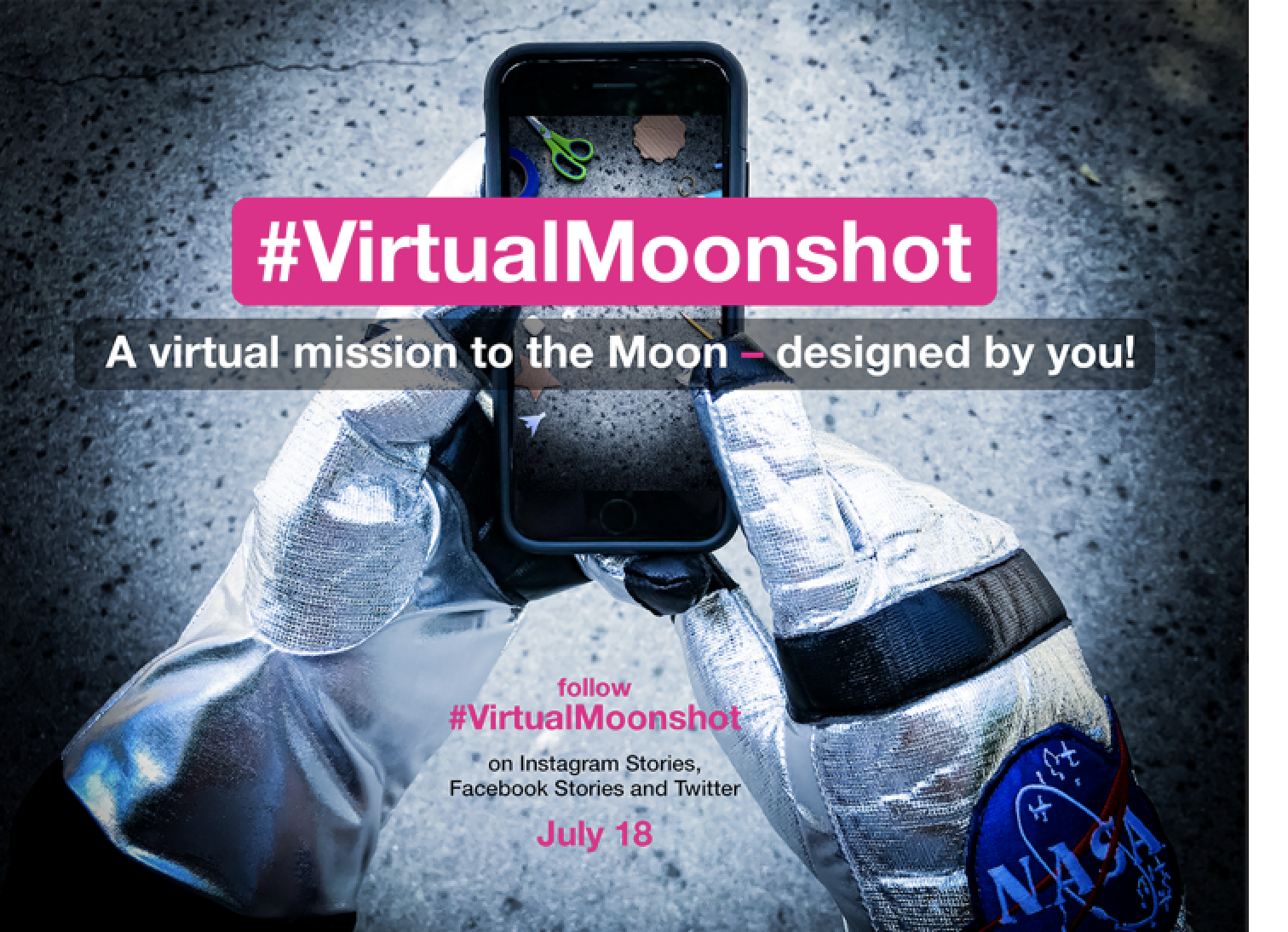 On July 18, museums nationwide were teaming up on a virtual NASA mission as they building lunar spacecraft out of materials chosen by their social media followers then launch them on a #VirtualMoonshot.

If you couldn't follow the fun live on the 18th, you can build your own straw rocket, lander or rover anytime! 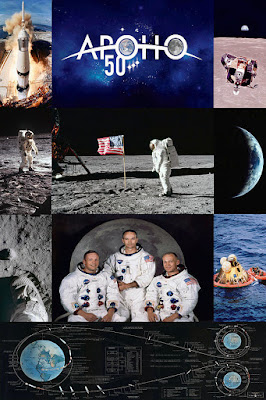 The Apollo 50th anniversary logo is available for download from the NASA Images and Video Library. 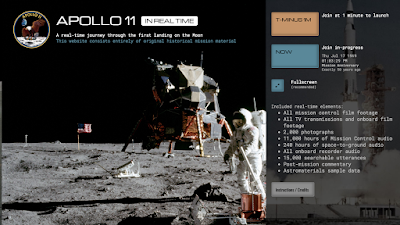 A real-time journey through the first landing on the Moon. The website consists entirely of original historical mission material.

Some events in history stand above all the rest. Mankind's first venture off this planet is still the pinnacle of human achievement.

You can experience the historic events of 1969 through the eyes of Neil, Buzz and Michael as they embark on history's greatest journey.

Dare to enter in the lunar module Apollo 11. It's free! You will love the journey! Believe me! 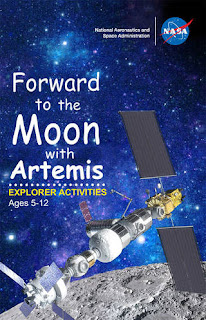 Forward to the Moon with Artemis
NASA, 2019
https://www.nasa.gov/

The free, printable booklet has mazes, word searches, sudoku puzzles with pictures and other types of puzzles. You can learn about NASA's new Space Launch System rocket and Orion spacecraft. These space vehicles will take humans to the Moon and to Mars. 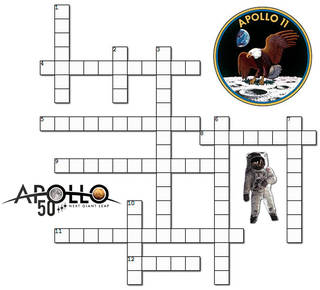 Visit the mission overview website below to learn more about the historic mission and find clues to solve this crossword puzzle! 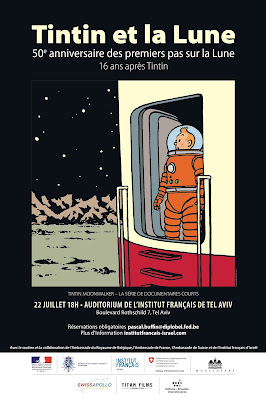 On this occasion, the Hergé Museum is organising its own screening of this series of short documentaries, on July 21 at 3 p.m. and at  at the Institut Français in Tel-Aviv on July 22. 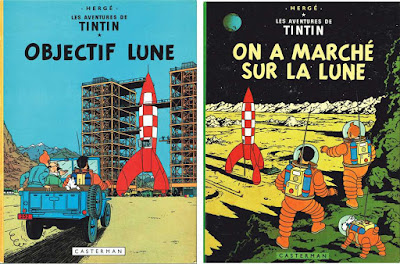 Objectif Lune (1952) & On a marché sur la Lune (1954)
Hergé
éditions Casterman
sur Amazone.fr
Six thrilling episodes in the company of Tintin and Snowy. The conquest of space which included walking on the Moon and other prestigious events illustrates how much of a visionary Hergé was. 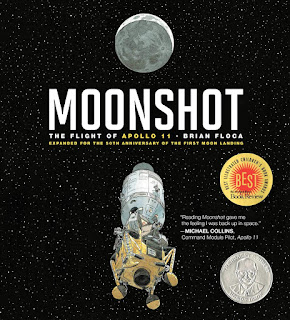 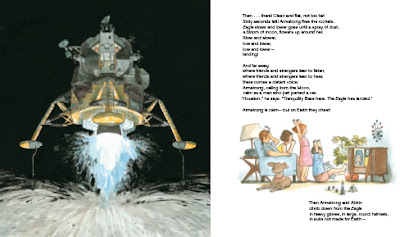 "In watercolors, ink and acrylics, the story of how the Apollo 11 mission unfolded." 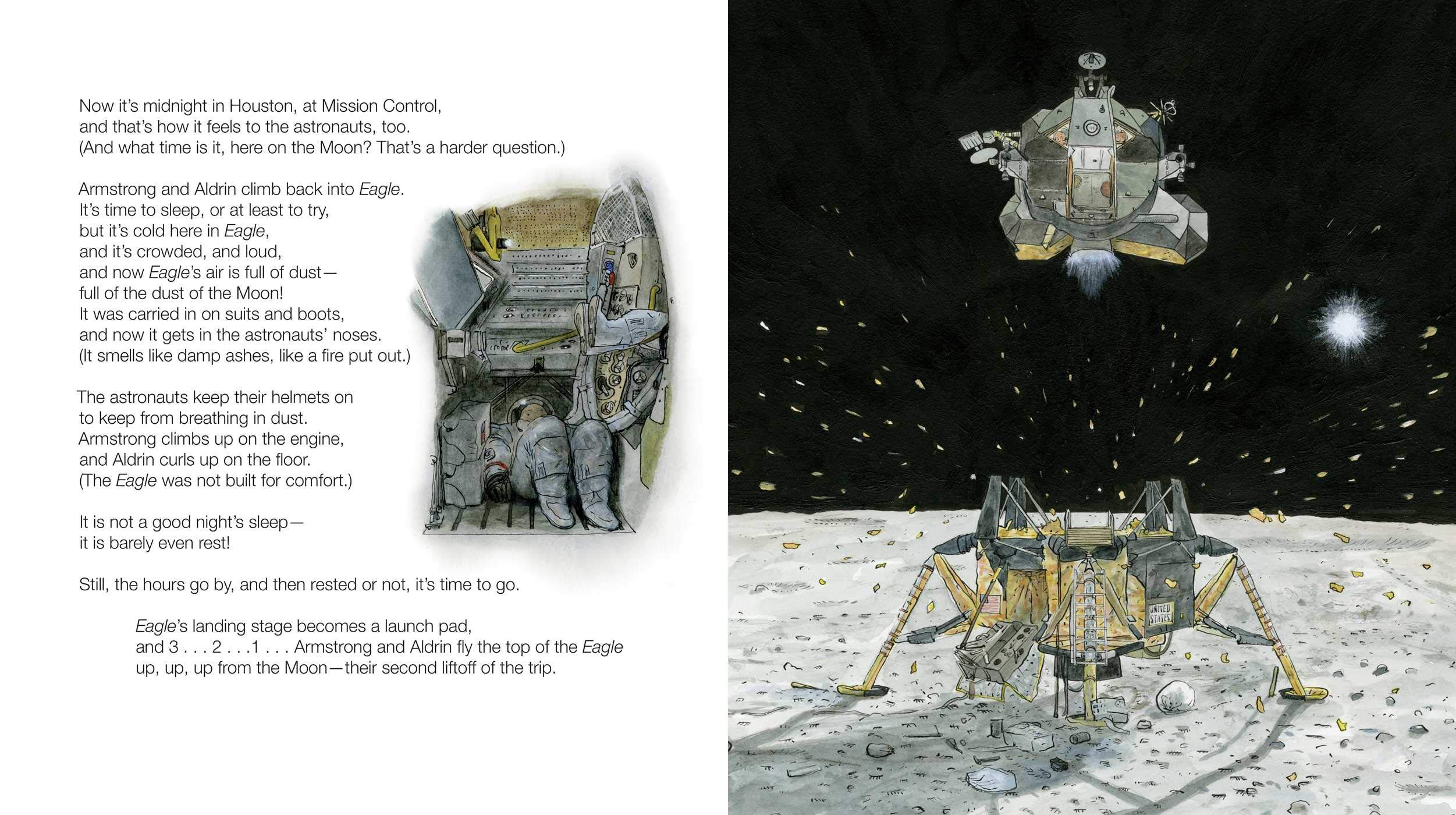 Moonshot : The Flight of Apollo II
Brian Floca (text & illustration)
Richard Jackson/Atheneum, 2019
https://www.amazon.com/
Simply told, grandly shown, here is the flight of Apollo 11. Here for a new generation of readers and explorers are the steady astronauts, clicking themselves into gloves and helmets, strapping themselves into sideways seats.

Here are their great machines in all their detail and monumentality, the ROAR of rockets, and the silence of the Moon. 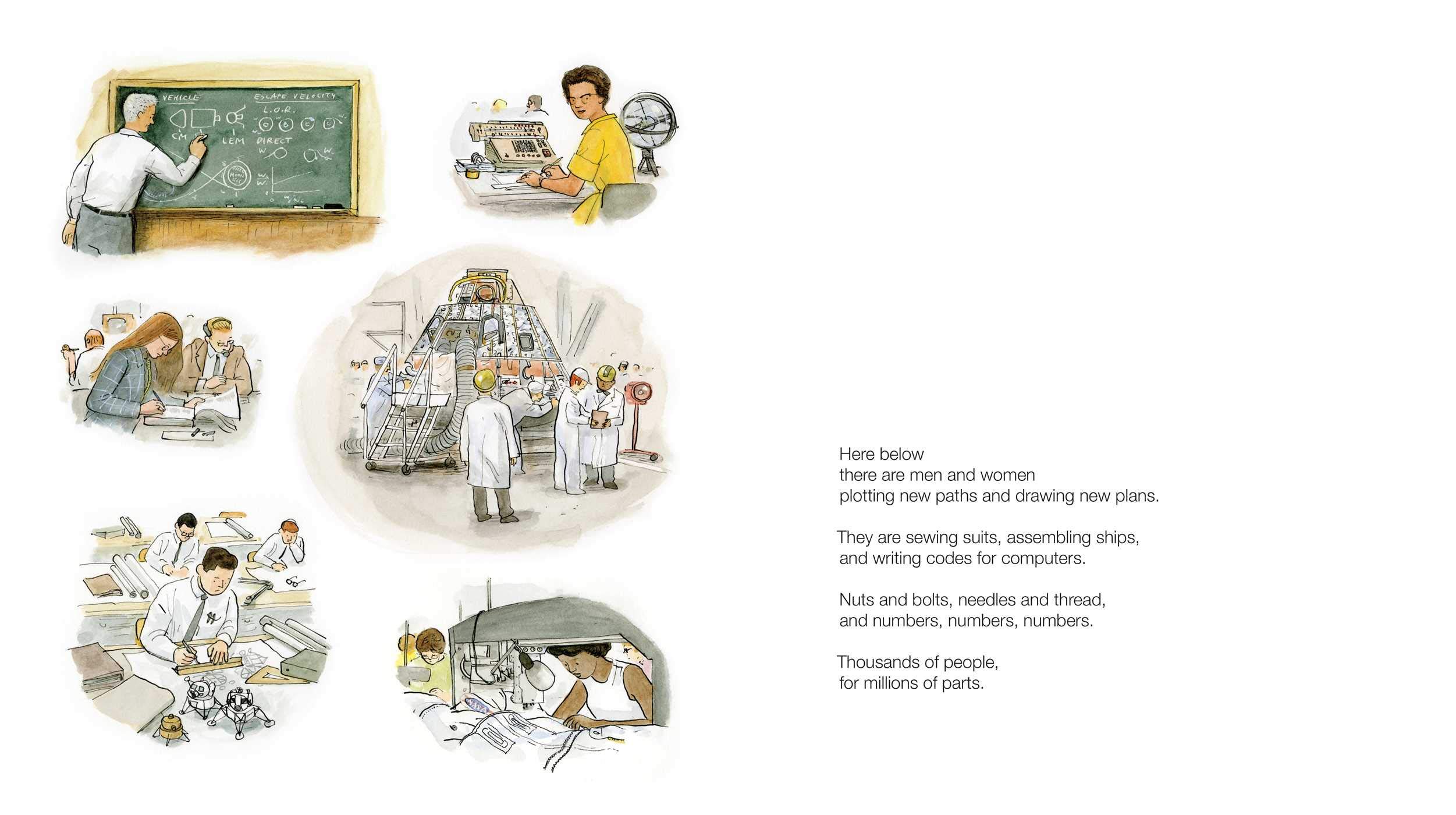 Here is a story of adventure and discovery, a story of leaving and returning during the summer of 1969, and a story of home, seen whole, from far away.

On the website, you can explore each illustration in detail by clicking on the image.

“What I want to remember most is the glance between Neil and myself, with the engine shutoff, just that second after we touched down, because we had just completed the most critical door opening for space exploration in all of humanity.”

Schools : 50 years ago Apollo 11 ! Men on the Moon : resources for teachers & students by G-Souto is licensed under a Creative Commons Attribution-NonCommercial-NoDerivatives 4.0 International License