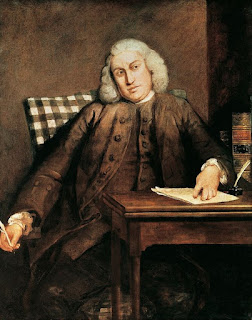 
Samuel Johnson, born on 18th September 1709 in Lichfield, Staffordshire. Often referred to as Dr. Johnson, was an English writer who made lasting contributions to English literature as a poet, essayist, moralist, literary critic, biographer, editor and lexicographer.
His early years were difficult - his parents were beset by financial problems - but from the books in his father's shop he found comfort and instruction, preparing him for his role as the century's greatest man of letters.

The Oxford Dictionary of National Biography describes Johnson as "arguably the most distinguished man of letters in English history.

"If you wanted to know what the word 'lexicographer' means today, you might Google it. If you fancy a throwback however, you might grab a dictionary."

Lexicographer? A person who compiles dictionaries. An author or editor of a dictionary. You Google it? Exactly.

"in many ways Johnson's original book was a precursor to the search engine Google". No doubt. Our students think so.

So Google pays homage to this pioneer lexicographer who dedicated years to his craft. 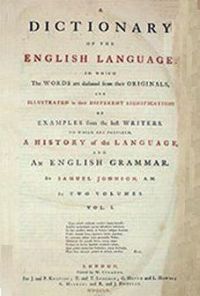 Dictionary of the English Language

Samuel Johnson published Johnson’s: A Dictionary of the English Language in 1755 after 9 years of work.

Johnson, born in 1709, spent nine years working on A Dictionary of the English Language, which was published in 1755. It remained the definitive English dictionary until the Oxford English Dictionary was completed in 1928. 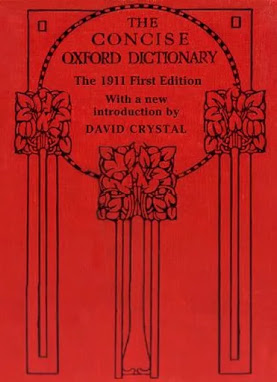 It was described as "one of the greatest single achievements of scholarship", and had a far-reaching effect on modern English. It was colossal at nearly 18 inches tall! Johnson’s was the premier English dictionary until the publication of the Oxford English Dictionary 150 years later.

The dictionary was published on 15 April 1755. It was not the first such dictionary, but was certainly the most important at that time.

Johnson, who grew up in Staffordshire, did not create the first English dictionary, but those that preceded his were poor comparisons, often stiff and dry.

It was hardly comprehensive: the first edition contained just 42,773 entries, compared to more than 250,000 words in the English language.

In Johnson's lifetime five further editions were published, and a sixth came out when he died on December 13, 1784. 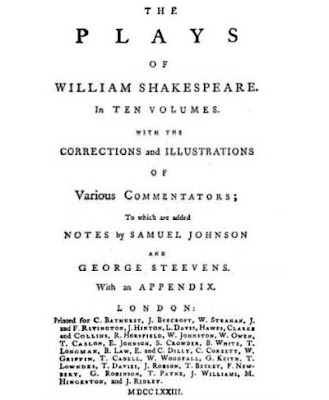 Johnson was also a poet, essayist, critic, biographer and editor. He was a poet and spent years creating a collection of the works of Shakespeare.

Johnson’s dictionary was more than just a word list: his work provided a vast understanding of 18th century's language and culture. His lasting contributions guaranteed him a place in literary history.

His efforts eventually earned him the Master of Arts degree from Oxford that he had pursued for many years, and the title page of the first edition acknowledged that fact (Lane 128-129). 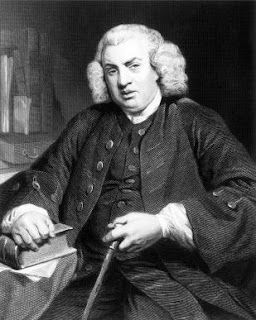 Samuel Johnson
by Evert A. Duycknick
via Wikipedia
https://en.wikipedia.org/

"Great works are performed not by strength but by perseverance."

He is described by the Oxford Dictionary of National Biography as "arguably the most distinguished man of letters in English history".

Poverty and illness followed Johnson for much of his life. He contracted scrofula (also known as the King’s Evil) as a baby, which resulted in poor hearing and eyesight and left him noticeably scarred.

Johnson attended the local grammar school in Lichfield and went on to Pembroke College, Oxford. However, he was to leave after just 13 months as his parents could no longer afford the fees. In 1735, he married a widow, Elizabeth Porter, and set up a school at Edial; it failed within months. 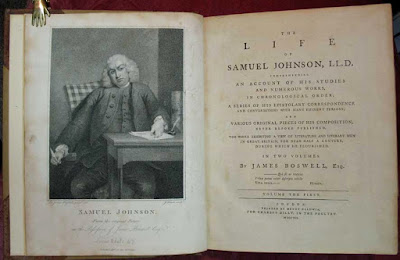 He is the subject of the most famous biography in English literature, namely The Life of Samuel Johnson by James Boswell.

He died on December 13, 1784, in his house in London, and he id buried in Westminster Abbey.

In our days if students want to know what the word 'lexicographer' means today, they Google it, right ?
But before the answer to any question was at their fingertips on the internet, they may have reached for a dictionary.
So today Google is the dictionary of our students. They don't appreciate to use the dictionary. But dictionaries are imperative resources to read and write, to learn and understand the English language, English literature, history, law,  science and many other subjects. 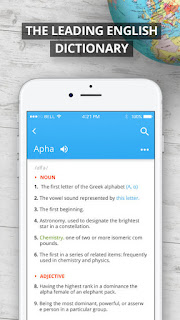 screenshot OED 2017 app
https://itunes.apple.com/us/app/
The dictionary encourages knowledge, curiosity and vocabulary skills. And students have apps to access it on their mobile devices. The dictionary is in their pocket. No hard work to do. 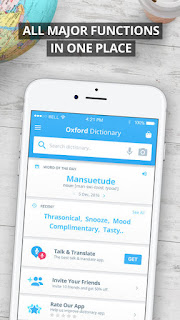 screenshot OED 2017 app
https://itunes.apple.com/us/app/
And for verbs? Yes, verbs! Students have some difficulties to learn the verbs. Why not an app to help them in the classroom?

Regarded as one of the flagship products in Oxford University Press catalog of dictionaries, the app features advanced search and learning tools designed by a vastly experienced developer. 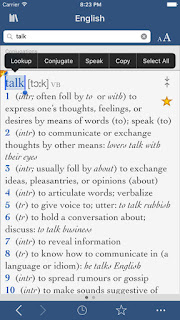 This app is tailored to professionals, students, and academics, as well as anyone who needs a comprehensive and authoritative dictionary of current English at work or at home. 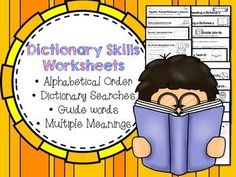 Teachers can place holder sheets practices to be used by younger students according to their learning level. Apps will perfectly suits their needs in the classroom. And some no internet connection required.

The focus on bringing the dictionary to life giving the students a sense of the context in which they read, talk, pronounce and write. They must improve those skills from a earlier age. 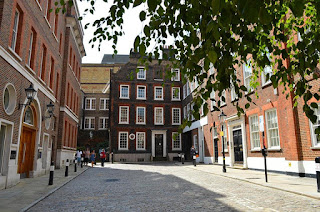 If you teach in London you can visit the Dr. Johnson's House with your students.

Dr Johnson's House with a 'Dictionary corner' runs a lively education programme that includes a range of free or low cost workshops for schools.

If you wish to book a visit or have a query about Dr. Johnson's House education programme, contact the Curator on Education: Primary; Secondary; A-Level English; Adult Education & University.

"Characters should never be given by an historian, unless he knew the people whom he describes, or copies from those who knew them."