Today is the big day to America. First total solar eclipse visible from the contiguous U.S. since 1979!

It’s been 99 years since an total eclipse crossed the width the United States.

On Monday, August 21, 2017, all of North America will be treated to an eclipse of the sun. Anyone within the path of totality can see one of nature’s most awe inspiring sights - a total solar eclipse.

While eclipses aren’t rare, a total eclipse, when viewers from Earth are at the very center of the moon’s shadow, only happens once every 18 months.

To see one requires you to be in just the right place on earth, and a total eclipse in the same location only happens every 375 years on average.

"This year, the 65-mile wide path of totality with sweep, sash-like, across the country—entering the map at Oregon and exiting at South Carolina."

The once-in-a-lifetime spectacle will attract an estimated 7.4 million people to areas in the path of totality, including so-called eclipse-chasers, who plan for years in advance and travel from far and wide to get a glimpse of the stellar phenomenon.


This video, narrated by actor George Takei, provides a few viewing tips for the public.

"During the August 21, 2017 total solar eclipse, scientists will use the Earth Polychromatic Imaging Camera (EPIC) on the Deep Space Climate Observatory satellite (DSCOVR), along with measurements taken from within the moon's shadow on the ground, to test a new model of Earth's energy budget."

Skywatchers on the American continent today are in for a special astronomical treat: front row seats to a total solar eclipse.

An eclipse occurs when the moon passes between the sun and the earth, blocking the light of the sun from reaching us.

No matter where you are in the country, if you plan to look at or even toward the sun, be sure to protect your eyes.

According to experts, only those in the path of totality are safe to look at the eclipse without protection, and only during totality.

The only safe way to look directly at the uneclipsed or partially eclipsed sun is through special-purpose solar filters, such as eclipse glasses (example shown at left) or hand-held solar viewers.

Who can watch the Total Eclipse:

To learn all about the 2017 Total Eclipse visit the website NASA Total Eclipse August 21, 2017 and follow NASA’s live, streaming video of the event.

Even so, teachers had prepared students to understand this incredible moment and will join astronomers on NASA streaming, skywatchers, or national observatories of Astronomy.

Remember your students ! DO NOT look directly at the Sun without appropriate protection, such as special eclipse glasses.

Special glasses that ensure sun spotters do not damage their eyes. Good solar eclipse glasses filter out all of the harmful ultraviolet and infrared light and almost all of the intense visible light to allow you to view the eclipse safely.

But thousands of people across the world are in the precess of building their own viewers. Children should get an adult to help build and use this projector. Take extra care when using sharp tools like craft knifes and scissors.

The safest way to view a solar eclipse is to project it onto a piece of paper. Using a cardboard box, you can make a pinhole projector.

After summer holidays, European achools will discuss their experiences and knowledge if they could watch the partial eclipse. Not so lucky as North American schools.

To learn more about solar eclipse science, you can click beyond the Doodle to Google Search and get some fun facts courtesy of our friendly space aliens.

They can learn about a crowd-sourced photo project to capture images of the eclipse as it traverses North America. 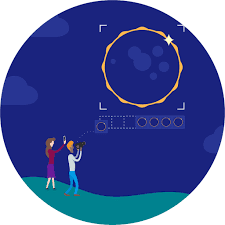 "The Eclipse Megamovie Project is gathering images of the 2017 total solar eclipse from over 1,000 volunteer photographers and amateur astronomers, as well as many more members of the general public. We’ll then stitch these photos together to create an expanded and continuous view of the total eclipse as it crosses the United States. The resulting dataset will be open to the scientific community and general public for future research."

If students and teachers were under the path of totality for the August 21, 2017 total solar eclipse, they can participate in the project. Wow! It will be excinting!

If you haven't already, go to your profile to update your eclipse viewing location, your camera setup and your photos!

The Eclipse Megamovie Mobile app from the Space Sciences Laboratory at UC Berkeley and Ideum is specifically designed to help you students, teachers, skywatchers view and photograph this incredible event and link them to a nation wide citizen-science project studying the sun.

The app also helps you plan ahead with information about the best route from your location to the eclipse’s path and a countdown clock ticking down to the big event. And if you use a DSLR to capture the eclipse, your images may become part of a stunning crowd-sourced movie created by Google. 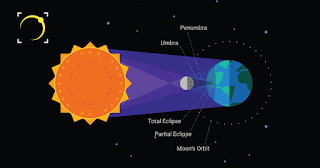 Led by Google, the Eclipse Megamovie Project will add a new dimension to our studies of the sun’s faint outer atmosphere – the corona. Corona is Latin for, “crown,” but in astronomy, it is an aura of plasma that explodes and arches out the Sun. The plasma corona extends millions of kilometers into space from the Sun and is easiest to see during a total solar eclipse or with a coronagraph.

NASA will stream the event live on a number of platforms:

Well! You have all you need to enjoy and learning about Total Eclipse. It will be a great science lesson, for sure!

Schools : Wow ! Stay up & watch the Total Eclipse 2017 by GinaSouto is licensed under a Creative Commons Attribution-NonCommercial-NoDerivatives 4.0 International License.