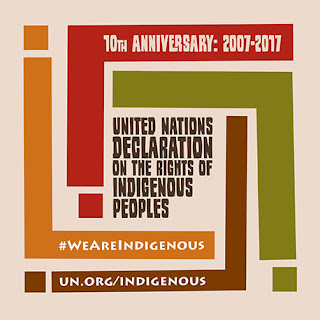 "This year, we celebrate the 10th anniversary of the landmark UN Declaration on the Rights of Indigenous People. This is an opportunity to honour the rights of indigenous peoples and their unique contribution to achieving mutual understanding, peace and sustainable development."

The International Day of the World's Indigenous Peoples, celebrated each year on 9 August, marks the day of the first meeting, in 1982, of the UN Working Group on Indigenous Populations of the Subcommission on the Promotion and Protection of Human Rights.

Ten years ago, on 13 September 2007, the General Assembly adopted the United Nations Declaration on the Rights of Indigenous Peoples, a major milestone with respect to the cooperation and solidarity between indigenous peoples and Member States. 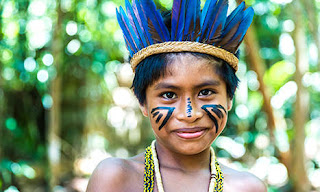 Theme 2017: "10th Anniversary of the UN Declaration on the Rights of Indigenous Peoples"

This is an opportunity to honour the rights of indigenous peoples and their unique contribution to achieving mutual understanding, peace and sustainable development. 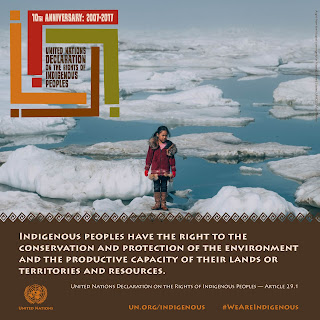 Indigenous peoples are custodians and practitioners of unique cultures and relationships with the natural environment.

They embody a wide range of linguistic and cultural diversity at the heart of our shared humanity.

Protecting their rights and dignity is protecting everyone’s rights and respecting humanity’s soul, past and future. 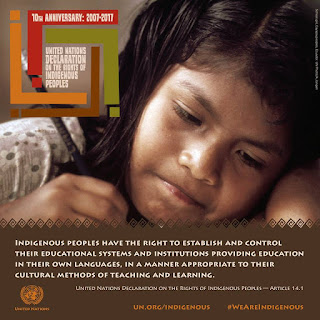 One of the clear things that we see among our students is the desire to connect with other students and that's something that technologies facilitate.

Teachers and students from different nations are encouraged to participate in observing the day to spread the UN’s message and UNESCO message on this special day that celebrates the 10th Anniversary of the UN Declaration on the Rights of Indigenous Peoples.

Activities may include educational forums and some activities in the classroom to gain an appreciation and a better understanding of indigenous peoples, their cultural and linguistic diversity.

Let's use the media to create bridges between young people and establish a truly intercultural world where diversity is preserved.

A world where different cultures not only coexist but value each other for their contributions and potential knowledge.

Students and educators are an important part of society to built bridges on a true dialogue for survival, dignity and well-being of all.

Students are spontaneous, kind, curious and love to learn about different cultures and languages.

This will not only be beneficial to indigenous peoples but for all of humanity and our planet. 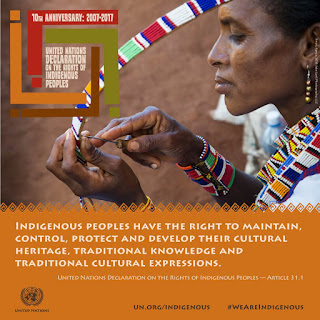 "Let us join our efforts and share this message - #weareindigenous !"

Education :: 10th Anniversary UN Declaration of the Rights of Indigenous Peoples by G-Souto is licensed under a Creative Commons Attribution-NonCommercial-NoDerivatives 4.0 International License.
Posted by G-Souto at 2:30 AM