Schools : Valentine's Day & The Theory of Everything : book memoir & biopic ! 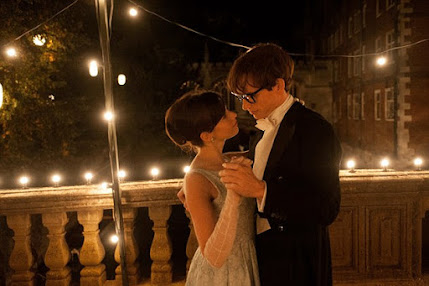 That's it ! February 14th! Valentine's Day! I'm sure your students are happy today. And they will love to talk about Valentine's Day into school curriculum!

Valentine's Day creates a great excitement in school. Students are happy, it's the time of first love for younger.

Well, there are plenty of teachable moments around the theme. Let's do it.

You might cover the history of V-Day, some V-Day themed literature, or a fun art project.

In 2013 I wrote about Paperman, a lovely short animated video. A little urban fairy tale. Charming! I love how there is just a touch of red in this otherwise gray world. Meg lipstick.

And last year, 2014, I selected some animated videos, one in special Jack et la Mécanique du Coeur by Mathias Malzieu, a nomminee to the Cesars 2015, (animated short movie).

In honor of Valentine's Day, this year, I would like to share with you a touching movie. A love story between the famous physicist Stephen Hawking and his former wife, Jane Wilde Hawking. 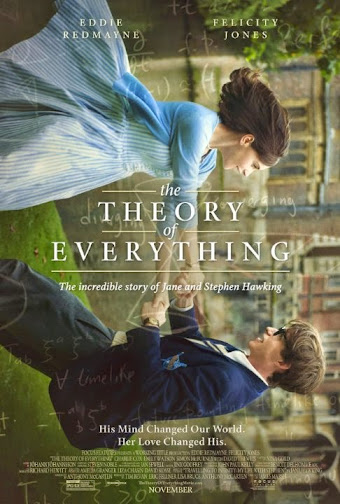 The Theory of Everything is a British biographical romantic drama film, directed by James Marsh and adapted by Anthony MacCarten.

It is based on the 2007 memoir “Traveling to Infinity: My Life With Stephen,” by his first wife, Jane Wilde Hawking. She has written about what it was like to fall in love with and then care for an increasingly disabled and celebrated genius. 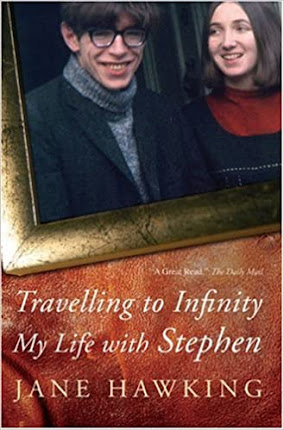 "Jane writes about her former husband with tenderness, respect and protectiveness." 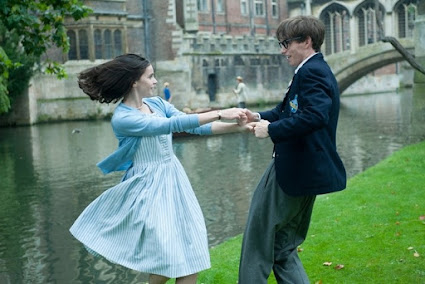 The story of Stephen Hawking (Eddie Redmayne) and his first wife Jane (Felicity Jones) from their early courtship, to his eventual diagnosis and physical decline from motor neurons disease and scientific breakthroughs, and his success in physics 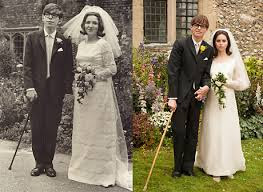 Overall, it's a fairly standard biopic, but Marsh directs it with a keen eye for period detail, presents Hawking's scientific breakthroughs in layman's terms, something Hawking himself has always been able to do, with his book A Brief History of Time having been written in a way that anyone could read it and understand it. 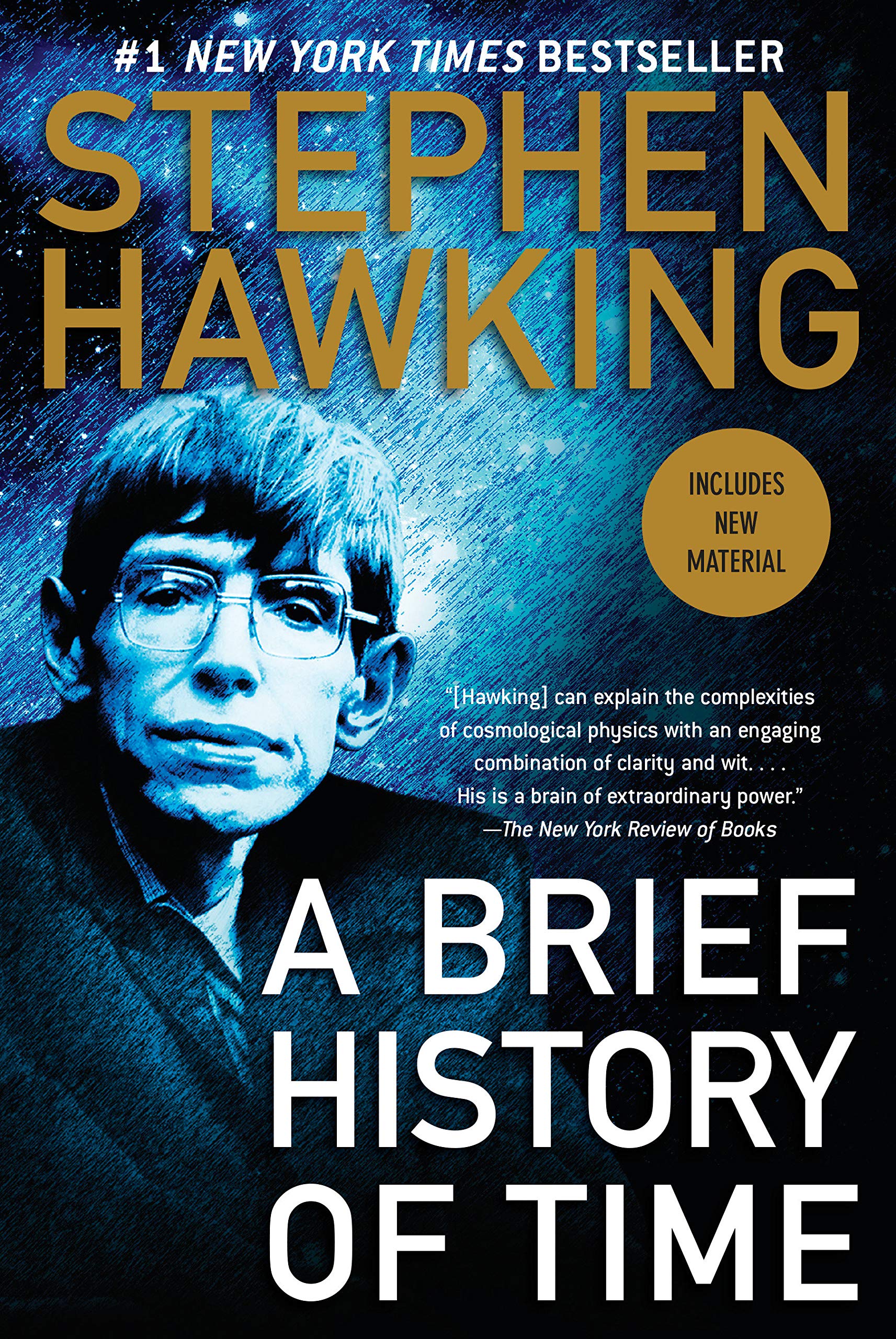 A Brief History of Time
Stephen Hawking
https://www.amazon.com/
Felicity Jones is terrific as the kindhearted, but firm Jane, who remains optimistic in the face of Hawking's diagnosis, but also won't be cowed by her husband's intellect.

Eddie Redmayne is a revelation. No matter how much you know about Hawking as a person, his performance can't help but move you, as thee movie tracks him from his early days as a healthy academic, through his physical decline and loss of motor function, all of which Redmayne conveys brilliantly.

The Theory of Everything
James Marsh, 2014
https://www.imdb.com/
By the later scenes, where Hawking is almost completely immobile and only really able to move his fingers and arch his eyebrows, you feel like you're actually watching a young Hawking.

Redmayne’s performance is, as should be expected, intensely physical, but the actor so fully and seamlessly embodies Hawking that it’s easy to forget that he’s even acting at all. He’s Hawking. 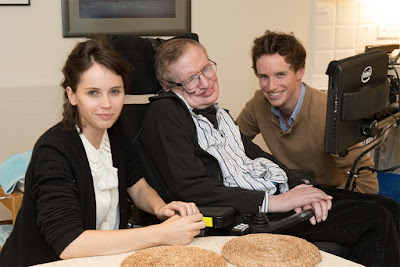 I went to to the movies to watch The Theory of Everything. The theatre was complete. Lots of young people, alone, in group with friends or with family.

We all were very touched with the movie. Some people cried a little bit watching the courage of Stephen and Jane.

At the end, some of us stayed in the room, thinking about or debating with friends or family the most important ideas of the movie.

The electronic voice that Redmayne uses in the later part of the film is the actual voice that Hawking still uses.

An instantly iconic performance from Redmayne, an equally as stellar turn by Jones, a stirring score.

A loving and honest tribute to both Hawking, intellectually and emotionally engaging.

Wonderful example of a human being surpassing all the odds without giving any credit to a deity, shows how someone who has had so much hardship in life required no belief in a god to still shine bright and long.﻿ 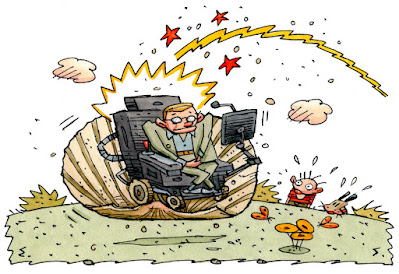 Millions of people and science fans who have read Dr. Hawking’s books, flocked to his lectures and watched him on The Simpsons, Star Trek and The Big Bang Theory have never known him except as a wheelchaired figure speaking in a robotic voice; for all they know he was always that way and floated down to Earth on a comet, like Venus drifting in on a half-shell.

I suggest to teachers and parents this biopic The Theory of Everything. A true love story full of courage, joy, and fight against a cruel disease. Your students and kids will discover the importance of never give up. 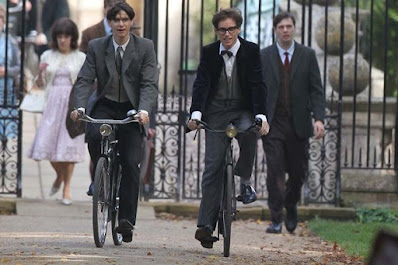 Princeton University, in 2014, invited its students to watch the biopic:

"The Theory of Everything tells the true story of Stephen Hawking and Jane Wilde, respectively one of the greatest minds of our generation and the person whose courage enabled him to take on a life-shattering diagnosis. This critically-acclaimed film offers a touching love story perfectly suited for the start of the holiday season."

So, as you see The Theory of Everything is a suitable digital resource to include into school curriculum. 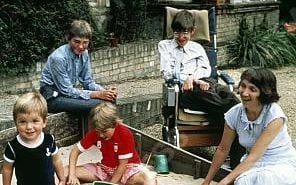 Stephen Hawking, Jane & children in the 80's
via The Telegraph

"He was a great scientist and an extraordinary man whose work and legacy will live on for many years.

"His courage and persistence with his brilliance and humour inspired people across the world.

"He once said, 'It would not be much of a universe if it wasn't home to the people you love."

Let's talk about showing movies in the classroom:
Of course students can do the same activity using their laptop or taqblet. However, in this exercise, they will be more concentrated using a piece of paper. 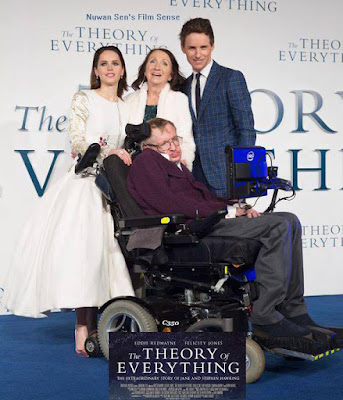 It's important that students do some research, not only about the biopc, but mostly about the real facts: life, scientific success.

Now, of course laptops, tablets even smartphones are the best tools.


Jane Hawking: "I firmly believed in Stephen and his brilliance"
https://www.theguardian.com/science/2015/jan/12/jane-hawking-stephen-hawking-first-wife-theory-of-everything-interview

The Theory of Everything star Eddie Redmayne : 'There's a math teacher out there laughing at me playing Stephen Hawking' - video interview:
https://www.theguardian.com/film/video/2015/jan/05/theory-of-everything-eddie-redmayne-stephen-hawking-video

The Theory of Everything Awards
https://www.imdb.com/title/tt2980516/awards?ref_=tt_awd

If some students have read the book, then ask them to write an essay about the differences between the biopic and the boo memoir. And about their impressions and new understanding of the story they came to after watching the biopic. Pay attention to their critical thinking.

As long as teachers are introduce movies correctly into school curricula, they can play a valuable role in the education process and can be an important aspect of a teacher’s strategy in providing lesson material to students.

The performance or display of a movie in-person classes or similar place, for example remote learning, devoted to instruction like learning environments can be one of the most interesting educational resources for k-12 and junior high school.

Curricula : It's a rich interactive approach to explore Literature, Languages or Sciences. Students enjoy very much watch films in the classroom, if their teachers prepared some activities.


It will be a very interesting cross-curricular activity as well : Languages/ Literature ; Sciences.

When we decide to include a film into our in-person lessons, we do a great job of reinforcing a point that we are trying to make in class. 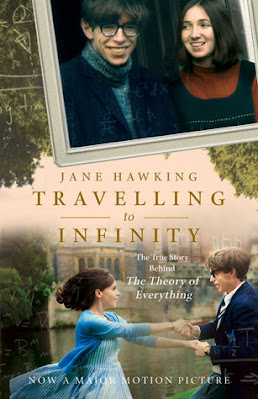 It's an important resource to introduce or reinforce the study of the novel, the characters, the plot, vocabulary, grammar.

It's important to reflect on what makes Hawking himself so remarkable. Yes, it's that he's brilliant. Yes, it's that he's exceeded the wildest expectations about his motor neuron disease and quality of life. But, it's also because of the attitude he maintains and perspective he provides.

If you teacher English as a foreign language, wow! what a good accent actors have!  Invite your students to listen a sample of the Audible audio edtion.

Everyday we must include something captivating into our lessons, even we are teaching important skills in serious curriculum to motivate students.
Passion is what will make our students enter in the classroom waiting for something special in the middle of a lesson everyday.

They will really realize that teachers love what they do, that we think about them when we are preparing a lesson for the next day.

"There should be no boundaries to human endeavor. We are all different. However bad life may seem, there is always something you can do, and succeed at. While there's life, there is hope."

Schools : Valentine's Day & The Theory of Everything, book memoir & biopic by G-Souto is licensed under a Creative Commons Attribution-NonCommercial-NoDerivatives 4.0 International License.