'Dinosaurs of the Lost Continent' in the classroom! 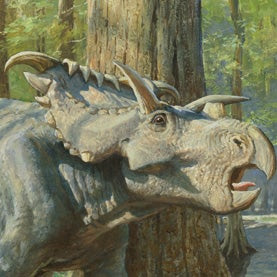 "Herd of Kosmoceratopsdinosaurs grazes among the cypress trees 76 million years ago in a primeval swamp in what is now southern Utah."

"The American West once harbored multiple communities of dinosaurs simultaneously - a revelation that has scientists scrambling to understand how the land could have supported so many behemoths." 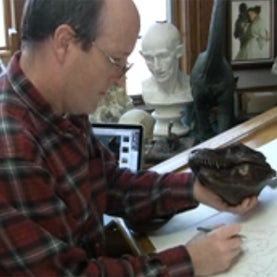 "We are continually trying to illuminate things from the past, present and future. For this feature, we needed to depict rarely illustrated dinosaur species. We turned to James Gurney because he is adept at constructing lost worlds. Here is a short "how-to" lesson on how he went about re-creating long-extinct dinosaurs, making them come to life on our pages.

The power of interactive exercises in the classroom is ubiquitous. Video lectures to watch in the classroom with the teacher available to help give students the possibility to interact more easily with the school curriculum. Remember Salman Khan and Let's use videos to reinvent education.

This is a fantastic video! A high quality teaching video that gives a good resource to improve Geography, History or Sciences curriculum.

Students are fascinated by dinosaurs. And watching the video, they will be able to understand the evolution of the world.

Today there are many teachers who use videos in the classroom and other digital resources to enrich the school curriculum thus flipping the traditional classroom script.

The students love to evolve in their skills using different data. They are excited and work better in school time.

And why not inviting your students to explore the making of a video?

A teacher’s value is not in the information stored in their head, I'm always  writing that. Teachers must have the ability to pull together the best learning resources to produce a desired outcome.

"Creativity is not some exotic, optional extra. It's a strategic issue."

Dinosaurs of the Lost Continent  in the classroom by G-Souto is licensed under a Creative Commons Attribution-NonCommercial-ShareAlike 3.0 Unported License.