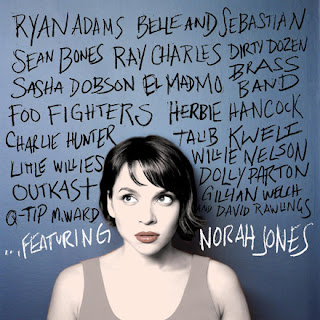 
Featuring... by Norah Jones. The cover art copyright is believed to belong to the label, Blue Note Records, or the graphic artist(s).

Norah Jones is standing at the wall with names of the artists who featured in the album.

The 18 songs on the album include duets with such legends as Ray Charles, Willie Nelson, and Dolly Parton, and with 21st Century icons from OutKast to the Foo Fighters.

The tracks on …Featuring span her entire career, from one of her earliest recording sessions (a version of Roxy Music’s “More Than This” with guitarist Charlie Hunter in 2001) to her most recent performance, a song called “Little Lou, Ugly Jack, Prophet John” that she cut with Belle and Sebastian, which will also appear on their new album.

“It's so exciting and flattering and fun when I get asked to sing with somebody that I admire,” says Jones. “It takes you a little bit out of your comfort zone when you're doing something with another artist. You don't know what to expect - it's kind of like being a little kid and having a playdate.” 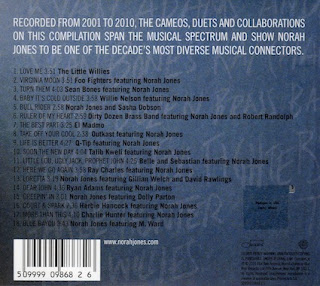 ...Featuring, the new album Norah Jones my own Christmas gift, for sure!

An excellent album to share with your students in Music curriculum.


She attended Interlochen Center for the Arts during the summers. While at high school, she won the Down Beat Student Music Awards for Best Jazz Vocalist (twice, in 1996 and 1997) and Best Original Composition (1996).

Jones attended the University of North Texas (UNT), where she majored in jazz piano and sang with the UNT Jazz Singers.

Sultry vocalist and pianist Norah Jones developed her 'unique blend of jazz and traditional vocal pop with hints of bluesy country and contemporary folk due in large part to her unique upbringing.'

A relaxing saturday night, returning from the movie Fair Game, winner of National Board of Review Freedom of Expression. I pick Virgin Moon featuring Foo Fighters.