Over in North America, the campaign trail to stop texting and driving amongst young people is hotting up. The issue has become a major cause for concern in the United States and beyond and has been given national attention by ministers and governments in recent years.

AT&T is taking the lead on texting-and-driving prevention with this 11-minute documentary on the topic, intended to reach consumers before New Year’s Eve. 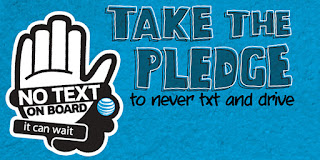 In addition to the pledge to stop texting behind the wheel, the campaign has equipped young people with a 'Activation Kit' which inlcudes statistics, research, tips and infographics such as the one below.
The document, called The Last Text, features stories about people whose lives were adversely affected by texting behind the wheel, including the parents of Mariah West, who died after texting “Where u at?” to a friend.

AT&T's Txtng & Drivng Campaign Urges Consumers That It Can Wait.

This video featuring families affected by texting while behind the wheel is being distributed to educators, government officials, safety organizations and public as part of a educational awareness campaign.


AT&T was distributing the film to schools, safety organizations and government agencies and on its YouTube channel. The doc is part of AT&T’s It Can Wait TV, print and online campaign, which the company introduced in March.


Part of that campaign includes a Facebook app where friends can take a pledge not to text and drive. 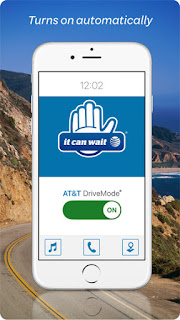 screenshot: app It can wait
https://itunes.apple.com/

Go on Facebook and pledge not to text and drive. For your friend, your older sister, your older brother. Don't give up!

Texting behind the wheel appears to be a growing problem among young people.

Don't text while you're driving! Remember! It Can Wait!

This campaign is rolling in the United States, but it could rolling on my country ... or yours!

It Can Wait by G-Souto is licensed under a Creative Commons Attribution-NonCommercial-ShareAlike 3.0 Unported License.

Email ThisBlogThis!Share to TwitterShare to FacebookShare to Pinterest
Labels: apps, AT and T campaign, Don-t text while driviving, education, It can wait, schools, schools campaign, students, teens, The Last Text