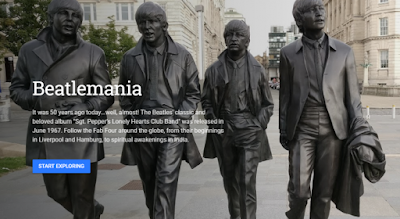 “The Beatles weren’t the leaders of the generation, but the spokesmen.”

The album which caused a major shift in modern music did help define the 1967 Summer of Love, but the hard work began in the winter of ‘66. Including 13 songs, the tracks were recorded in over 400 hours during a 129-day period.

On a return flight to London in November 1966, Paul conceived the idea for the album. Unable to sleep, he toyed with the idea of creating a new identity for the band, to allow them to experiment, with each Beatle taking on an alter-ego in the ‘Lonely Hearts Club Band’.


During the flight, a conversation about the ‘S’ and ‘P’ markings on the salt and pepper sachets occurred between Paul and Mal Evans, the Beatles’ road manager, and sparked the idea for the title ‘Sgt. Pepper’.

Follow the Fab Four around the globe, from their beginnings in Liverpool and Hamburg, to spiritual awakenings in India.

We can see what the places The Beatles once performed at look like now, check the Google Earth tour out. 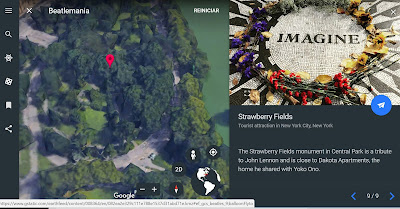 The Strawberry Fields monument in Central Park is a tribute to John Lennon and is close to Dakota Apartments, the home he shared with Yoko Ono.

Fifty years ago, The Beatles released the album Sgt. Pepper’s Lonely Hearts Club Band and took millions of listeners into a fantastical world.

From last May 26, the Google Earth storytelling platform Voyager is celebrating not only this influential album but the whole of the Fab Four's contributions to rock'n'roll.

Ask your students to take a virtual tour around the real world of iconic places that helped form the legacy of The Beatles. Let them express their impressions or feelings.

Aims:
Using its new Google Earth storytelling tool, Voyager, they will transported across the globe to nine different locations that represent pivotal moments in the Fab Four’s illustrious career.

Note: All locations have text on the side to explain the historical significance. 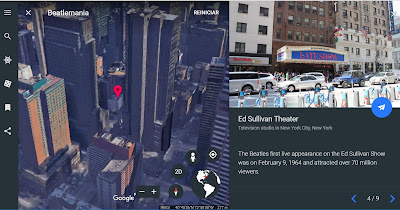 For some locations in the tour, students are automatically zoomed into a view of the street. Others, like New York City’s Ed Sullivan Theater, they will need to click on the Street View icon in the lower left-hand corner and then click on the location pin to zoom into the hallowed halls where

The Beatles gave their first televised performance to 70 million viewers in 1964.

The Beatles got their start at Liverpool's Cavern Club. This reconstructed venue, just steps away from the original, is home to 1960s memorabilia and hosts live tribute acts. 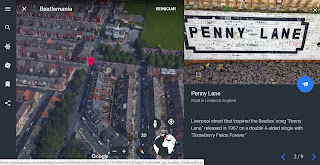 Liverpool street that inspired the Beatles' song Penny Lane, released in 1967 on a double A-sided single with "Strawberry Fields Forever".

Prepare the video music or if the school or teachers have access to Spotify invite students to hear it.

Them students have chance to move along the street in Liverpool, England, that inspired the song Penny Lane. 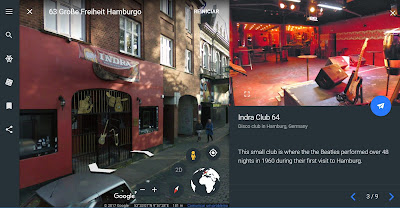 Indra Club 64 the small club is where the Beatles performed over 48 nights in 1960 during their first visit to Hamburg. 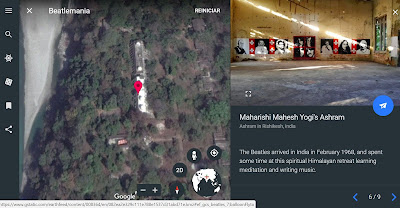 After some other important places students get India where the Beatles arrived in February 1968, and spent some time at this spiritual Himalayan retreat learning meditation and writing music. 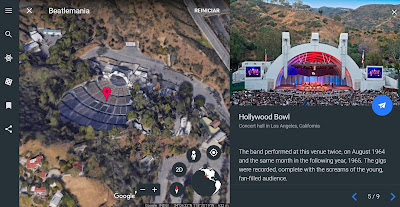 Students will be able to look around the stands at the Hollywood Bowl where the band performed twice  on August 1964 and the same month in the following year, 1965.

The gigs were recorded, complete with the screams of the young, fan-filled audience.

Live at the Hollywood Bowl
The Beatles
http://www.thebeatlesonline.co.uk/

Those performances were so good they were recorded and released as the 1977 Beatles live album The Beatles at the Hollywood Bowl. 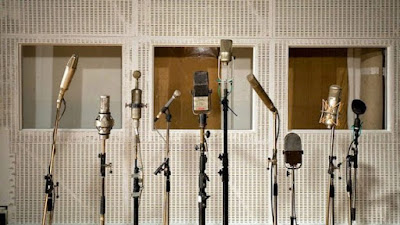 On August 20, 1969, all four members of The Beatles came to Abbey Road Studios to record music together for the last time as a band. 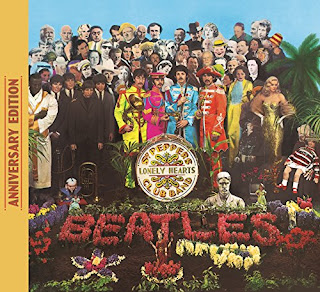 "Sgt Pepper’s Lonely Hearts Club Band Anniversary Edition is Out Now. A Splendid Time Is Guaranteed For All.”

Sgt. Pepper's Lonely Hearts Club Band
anniversary edition
http://www.thebeatles.com/news
All of the original songs have also been given new stereo mixes produced by Giles Martin, son of the late Beatles producer, Sir George Martin.
The deluxe editions are available and are a definite must-have for any Beatles fanatic. Who knows if you have a Beatle 'fanatic' among your students?

So let them click here and begin their tour of Beatles moments around the globe.

"Music should be a very solid part of the education of young children."

Voyager allows Earth’s students to feed their wanderlust and pretend they are somewhere - anywhere - other than the classroom cubicle they are actually sitting in.

Say they've never know how The Beatles travelled from Liverpool to India? Voyager pairs the view provided by its maps with an image and a legend for the nine different locations.

I defend Music in school curriculum as a serious matter! I wrote about it in different occasions:

A DJ in the orchestra: what a Music lesson could be; International Music Day; Enjoy the Centenary of The Rite of Spring; Music at school : App for students with visual disabilities; Celebrate the International Jazz day playing and other.

Sir George Martin was the first person to receive an honorary doctorate from Lund University's Faculty of Fine and Performing Arts and the Malmö Academy of Music (2010).


In this short interview, Sir George Martin talks about the importance of Music curriculum in public schools (elementary and secondary education).

Without any doubt, the importance of Music as social inclusion for kids  has a recognised value in  so many countries. There are wonderful experiments.

The holistic immersive approach of Music (rock, pop, classical) and the engagement of important and experencied musicians is central to achieving significant transformation, particularly to the lives of the most vulnerable children.

"Music is the movement of sound to reach the soul for the education of its virtue."

Beatlemania/ Voyager Google Earth
The Beatles
Blog Google
Posted by G-Souto at 12:30 AM