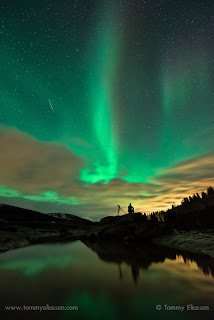 I start the New Year with the Quandrantid Meteor Shower. The first meteor display of 2016 – the Quadrantid meteor shower - will hit its peak early Monday morning (Jan. 4), with a strong display of "shooting stars" likely for Europe and North America.

Weather permitting, observers in the eastern regions of the United States and Canada will be in position for the maximum activity from the Quadrantid meteor shower, which is expected about 3 a.m. EST, when the radiant of the shower will be well up the dark northeastern sky. This is perfect timing – it falls right in our prime meteor-watching hours before dawn.
The meteors appear to radiate from a spot on the sky midway between the last handle star of the Big Dipper and the head of Draco, the Dragon. The radiant is actually located within the boundaries of the constellation of Boötes, the Herdsman, so we might expect them to be called the "Boötids." 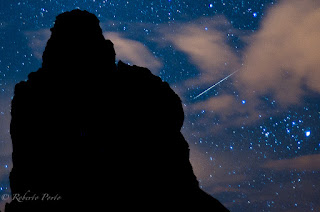 Meanwhile, the peak of the Quadrantid meteor shower lasts only a few hours. So you have to be on the right part of Earth, the part that’s in nighttime – preferably with the radiant high in your sky – during those few hours of the shower’s peak, in order to see the most Quadrantid meteors.

In the pre-dawn hours of Monday, January 4, the first meteor shower of the year, the Quadrantids, reaches its maximum.

The good news is that, in 2016, the waning crescent moon shouldn’t too greatly disrupt the shower.

Now the not-so-good news. Although the Quadrantides put out 50 or more meteors in a dark sky, the Quadrantids’ peak is very narrow. The peaks of the Perseid shower or Geminid shower persist more or less for a day or more, allowing all time zones around the world to enjoy a good display of Perseids and Geminids. 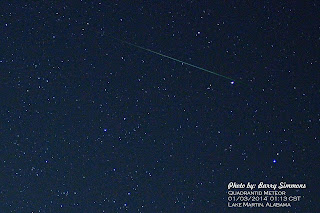 The meteors will appear to radiate from the northeast sky, just off the handle of the Big Dipper. This is the site of Quadrans Muralis, a constellation no longer recognized by astronomers but which gave the Quadrantids their name. 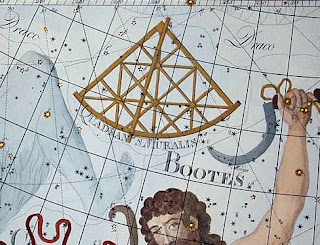 The Quadrantid? Origin of the name:

The name Quadrantids comes from the constellation Quadrans Muralis (Mural Quadrant), created by the French astronomer Jerome Lalande in 1795. This now-obsolete constellation was located between the constellations of Bootes the Herdsman and Draco the Dragon. Where did it go?

Most meteor showers are named for the constellations from which they appear to radiate. So it is with the Quadrantids. But the Quadrantids’ constellation no longer exists.
To understand the history of the Quadrantids’ name, we have to go back to the earliest observations of this shower. In early January 1825, Antonio Brucalassi in Italy reported that “the atmosphere was traversed by a multitude of the luminous bodies known by the name of falling stars.” They appeared to radiate from Quadrans Muralis.

Adolphe_Quételet_
by Joseph-Arnold_Demannez
https://en.wikipedia.org/
In 1839, Adolphe Quetelet of Brussels Observatory in Belgium and Edward C. Herrick in Connecticut independently made the suggestion that the Quadrantids are an annual shower.
But, in 1922, the International Astronomical Union devised a list 88 modern constellations. The list was agreed upon by the International Astronomical Union at its inaugural General Assembly held in Rome in May 1922. It did not include a constellation Quadrans Muralis.

Today, this meteor shower retains the name Quadrantids, for the original and now obsolete constellation Quadrans Muralis.
The radiant point for the Quadrantids is now considered to be at the northern tip of Bootes, near the Big Dipper asterism in our sky, not far from Bootes’ brightest star Arcturus. It is very far north on the sky’s dome, which is why Southern Hemisphere observers probably won’t see many (if any) Quadrantid meteors. The meteors simply won’t make it above the horizon for Southern Hemisphere skywatchers.
What is the peak date for the Quadrantid shower in 2016?
Different sources might give different dates and precise times for meteor shower peaks. Earth Sky relies on the Observer’s Handbook 2016 and the International Meteor Organization (IMO) to help us out. Both of these sources give the date of peak on January 4, and the time at 8:00 Universal Time.
If that prediction holds true, the peak will be 2 a.m. for the central United States on January 4.
The shower favors the Northern Hemisphere because its radiant point is so far north on the sky’s dome.
What time should I watch the Quadrantid meteor shower in 2016?
All other things being equal, for any meteor showers, you are likely to see the most meteors when the radiant is high in the sky.
In the case of the Quadrantid shower, the radiant point is seen highest in the sky in the dark hour before dawn.
Unlike most meteor showers, we have to hope that the narrow peak of Quadrantid shower happens at or near the same hour that the radiant point resides highest in your sky.
Here’s that peak time again, according to the International Meteor Organization: January 4 at 8:00 Universal Time. Click here to translate Universal Time to your time zone.

Day and night sides of Earth at the predicted peak of the Quadrantid meteor shower (2016 January 4 at 8 Universal Time).

If the prediction holds – which is a big If - then northwestern Europe, northeastern North America and Greenland all have a shot at seeing the Quandrantid meteor shower at or near its peak in the dark hours before dawn January 4, 2016.

So you have to be on the right part of Earth, the part that’s in nighttime – preferably with the radiant high in your sky – during those few hours of the shower’s peak, in order to see the most Quadrantid meteors.

Although the Quadrantids can produce over 100 meteors per hour, the sharp peak of this shower tends to last only a few hours, and doesn’t always come at an opportune time.

In other words, you have to be in the right spot on Earth to view this meteor shower in all its splendor. The radiant point is in the part of the sky that used to be considered the constellation Quadrans Muralis the Mural Quadrant. 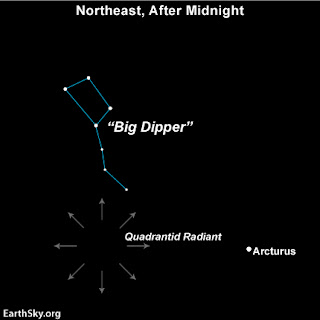 You’ll find this radiant near the famous Big Dipper asterism, in the north-northeastern sky after midnight and highest up before dawn. Because the radiant is fairly far to the north on the sky’s dome, meteor numbers will be greater at northerly latitudes in the Northern Hemisphere.

Tomorrow, the 4 January 2016, we have the possibility to admire 13 the Quadantrid meteor shower.

Wow! Even on the first day of school time after the Christmas holidays. Our students will be happy with this new challenge.

Most of us are excited about the Quadrantid shower, specially if you teach sciences or are science students. Of course, skywatchers as well.

My usual readers know I don't teach sciences, but humanities. But I'm a passionate of science and all the high technology near science.

Do you remember the Science education: Ready to watch the Geminids shower last 13 December, 2015? Just awesome! A sky full of stars.

This time, the European teachers and students are in school. A good natural resource in the sky to enhance the first day of Sciences lesson! The Quadrantids.

You have a perfect lesson to start the science course 2016.

"The night sky tonight on any clear night offers an ever-changing display of fascinating objects you can see, from stars and constellations to bright planets, often the moon, and sometimes special events like meteor showers."

Observing the night sky will enhance some experiences to understand science. If you and your students are extremely lucky – and at the right northerly location on the globe – perhaps you’ll see some Quadrantid meteors in the predawn hours on January 4.

During the Quadrantid shower skywatching, teachers and students can be skywatchers, and at the same time do some good shots, or videos with iphones, smartphones or tablets.

The event will be discussed next lesson(s).

Hope you will enjoy to be a skywatcher tonight, January 4th 2016 admiring the beauty of this interesting event.

Sciences curricula : Catch Some Falling Stars, the Quadrantids by G-Souto is licensed under a Creative Commons Attribution-NonCommercial-NoDerivatives 4.0 International License.