October rundown of the most read posts 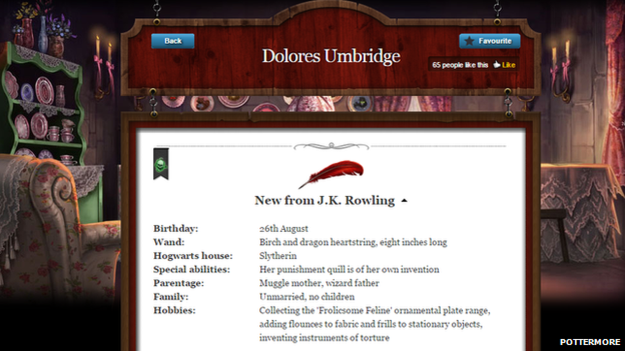 Harry Potter fans were counting down to last Friday. Just in time for Halloween, Harry Potter creator J.K. Rowling published a new essay one of her greatest villains: the Hogwarts professor and witch, Dolores Umbridge.

She was introduced to the world of Harry Potter in Harry Potter and the Order of the Phoenix when she taught Defense Against the Dark Arts to Harry and his schoolmates.

It follows a string of new Potter material released by Rowling this year via Pottermore.com. In July a fake news story about the Quidditch World Cup that gave an update on Harry, Ron, and Hermione, a snarky World Cup liveblog from the notorious Rita Skeeter, and a deep look at the singing witch Celestina Warbeck.

I could not write about the Umbridge new story on October 31. But I published the news on my Facebook page.

It's the end of the month and as I do every month I have put together a list of the most popular posts of the month. You will find posts written in English, French and Portuguese.

Here my list of the most popular posts of the month:

Apps in Education: Photomath, the dream for students

Education : Are you ready to code with Dr Who ?

Hope you had fun on Halloween. The winter is back after a sunny and warmy October. We had a chilly Halloween suddenly. A spooky Halloween poem?

Wherever you are this weekend, I hope that you have time for something fun too.

I'm back to posting the normal roundup this week.

October rundown of the most read posts : back to school by G-Souto is licensed under a Creative Commons Attribution-NonCommercial-NoDerivatives 4.0 International License.