"It's a miracle, a wonderful event,"

With anxious anticipation increasingly yielding to exuberant celebration, the haggard men trapped under a half-mile of rock for more than two months have been emerging to the arms of their families and an electrified nation.
NYT

The 15 miners already rescued emerge like clockwork, jubilantly embracing wives, children and rescuers and looking remarkably composed today, the 13 October, after languishing for 69 days in the depths of a mine where easily they could have died.

Not only Chile or Bolivia or even so Latin America! All over the world people  follows and rejoices with the bravety of those men and the courage of a people who believed always in the rescue of those 33 miners and didn't give up on anyone and worked to protect and save every life. 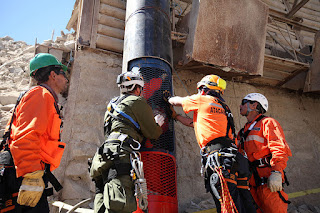 
Communications technology — including live video from within the mine — turned the entire world into a global village hoping for the safe release of men they did not know and would probably never meet. It was as if each of us could see ourselves in their place, wondering how we would cope with the sustained terror and then the sudden emergence into the light.

Education:
What a courageous live story! A live-streaming lesson tha teachers and students can flollow on their media devices. An incredible lesson of courage, faith, science and high technology!

Don't miss this opportunity to enhance learning in the classroom! Today the world made History!

OUT of the night that covers me,
Black as the Pit from pole to pole,

I thank whatever gods may be
For my unconquerable soul.

It matters not how strait the gate,


How charged with punishments the scroll,
I am the master of my fate:

I am the captain of my soul.