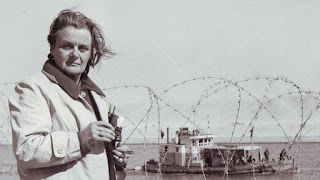 Yesterday, the 10 October, Google celebrated with a doodle the 106th birthday of the most active war journalists of the 20th century. Clare Hollingworth’s  a pioneering war journalist.
Clare Hollingworth - who died this year on January 10th aged 105 - was the first war correspondent to report the outbreak of World War II in 1939.

Google doodle Clare Hollingworth’s 106th birthday
doodler: artist Eleni Kalorkoti
https://www.google.com/doodles/
She had been working at the Telegraph for less than a week when she broke the story, described as the "scoop of the century".
Just one week after joining The Telegraph, Clare showed the world why she was called “the doyenne of war correspondents.”

Travelling alone across the Germany-Poland border, she witnessed the outbreak of the Second World War on September 1, 1939 when, as a novice Daily Telegraph stringer, she was woken at her hotel in the Polish town of Katowice by the sound of anti-aircraft fire aimed at German bombers. 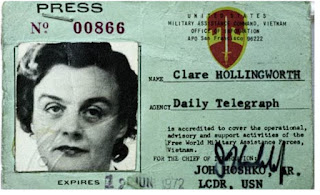 Hollingworth's press / the Daily Telegraph
credits: Richard Jones/sinopix
http://yp.scmp.com/news/
Before she landed "the scoop of the century" as a rookie reporter, Clare Hollingworth had already saved the lives of thousands of Eastern European refugees, getting them out of harm’s way as German and Russian armies advanced.

“I would never use my femininity to get a story that a man could not get,” Clare once said, a testament to her taste for danger, and her belief that better stories came from the most dangerous assignments.

Because today is the Day of the Girl, I think it's important to say girls should dream big and most of them do. They aspire to be austronauts, scientists, artists, teachers, writers and why not war journalists.

And now, it's time to the review of the most popular posts of September:

Schools : Google, we love you !

Schools : Intl Day of Peace : Together for Peace : Imagine !


Hope you enjoyed my pedagocical proposals published in September. I know you loved because there is a wonderful number of readers.

Thanks all the educators from around the world that kindly read my blog every day.

Have a nice time wherever you are! Here, Summer is back!

September in review in review & Clare Hollingworth, the pioneer war journalist by G-Souto is licensed under a Creative Commons Attribution-NonCommercial-NoDerivatives 4.0 International License.