Today the world of arts celebrates the 161st birthday of Catalan architect Antoni Gaudi. Gaudi was born on June 25, 1852, in Reus, a small town south of Barcelona, and he died in a street accident in 1926.

Some notes about Gaudi:

Under the influence of neo-Gothic art and Oriental techniques, Gaudí became part of the Modernista movement which was reaching its peak in the late 19th and early 20th centuries.

The intellectual context towards the end of the 19th century in Catalonia was marked by Modernism, a movement that extended from around 1880 to the First World War, parallel to currents such as Naturalism, Arts and Crafts, and Art Nouveau. It was motivated by return to traditions as an expression of national identity, as well as by the introduction of modern techniques and materials.

Modernism differed from the other movements by becoming important for popular cultural identity. You do remember The Rite of Spring by Igor Stravinsky, another modern artist, a great composer, pianist and conductor. 
"Those who look for the laws of Nature as a support for their new works collaborate with the creator."

Gaudí's work was influenced by his passions in life: architecture, nature, and religion.
Known as "God's architect", Gaudí's work represents the genius of the architect, expressing particular spatial qualities and plasticity in the undulating lines and harmonies of colours and materials in architectural surfaces and sculpted features. 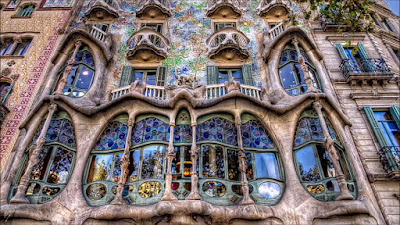 This is the reason of seven of his designs, in and around Barcelona, have been designated UNESCO World Heritage Sites. Those works build in or near Barcelona testify to Gaudí’s exceptional creative contribution to the development of architecture and building technology in the late 19th and early 20th centuries.

"These monuments represent an eclectic, as well as a very personal, style which was given free reign in the design of gardens, sculpture and all decorative arts, as well as architecture." 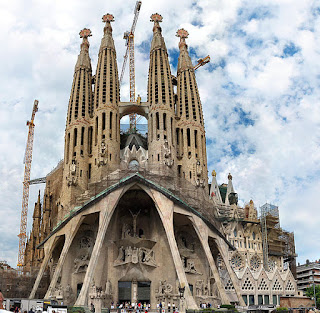 Gaudi never managed to finish his masterpiece, the Sagrada Familia church, as he was struck and killed by a tram in Barcelona in 1926. The church is one of the largest in the world, and remains one of the most visited sights in Barcelona to this day.

All my readers know how I'm a defender of Arts Education in school curricula. You know my thoughts about the importance of Arts in School Education, no matter the art fields: Music, Dance, Literature, Painting, Architecture, other. All Arts are essential to a complete and better education of young people.

And I love Google doodles! They can be included in every school curriculum as I already wrote. I write a lot about Google doodles, my usual readers know it. Doodles combine creativity, digital culture and motivation to include into school lessons. You must think about it.

Asymmetrical layouts, visionary facades, curved lines, pristine forms and colorful ceramic tiles on top, with this dream the sixteen year-old Antoni Gaudí left his hometown Reus in 1868. Once he got there the Catalan port city never let him go. From study to death – his entire life and work took place in Barcelona.

Here, a good motivation to one or two lessons about Arts, Modernism, and Architecture.

Level: All levels including Vocational Education.

Of course each teacher must prepare and adapt the activities to the level they are teaching.

Resources for teachers & students of Arts: 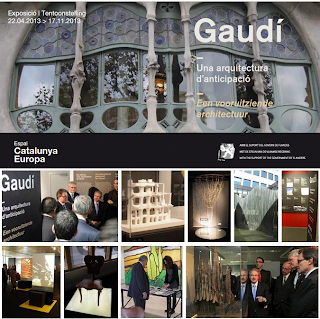 If you are lucky and you are teaching in Brussels or near Brussels, don't loose the possibility to prepare a school visit with your students next September at the exhibition about Gaudí's innovative art held in Brussels.

The exhibition Gaudí, an architecture of anticipation is open to the public in the Catalunya Europa space in the offices of the Catalan Government Delegation in Brussels and will be on show until the end of this year.

The exhibition presents the art and the creative genius of the Catalan architect and has a space reserved for the Sagrada Família, with a model and an information panel with pictures and texts. 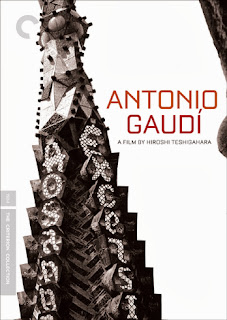 There is an interesting digital resource that you can include into your lessons. A documentary Antonio Gaudi by Hiroshi Teshigahara. His camera takes us over, under, around, and into buildings and a park designed by Antoni Gaudí.

Of course, new technologies, videos, films and social media in the classroom are important tools to tackle the world's toughest problems creating bridges and establish a truly intercultural world, where diversity can be celebrated, a world where different cultures not only coexist but value each other for their contributions and potential. Your students will be prepared to be entire citizens.

“Art is not what you see, but what you make others see.”