Alice in Wonderland, a video game for young kids at school ? 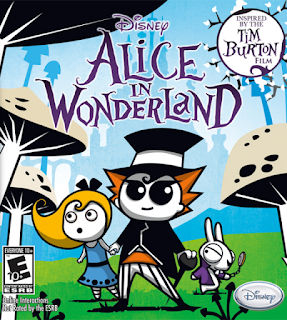 Here we are again talking about Alice in Wonderland, the fantastic movie by Tim Burton!

Alice In Wonderland is a 2-D side-scrolling platform adventure whose primary focus is puzzle-solving.

To track down the items Alice needs, her allies embark on a search through the different levels of Wonderland.

Now, I would like to let you know my opinion about this Nintendo DS game Alice for young kids (7 years-old, primary school).


In the role of the White Rabbit, the Cherishe Cat or the Mad Hatter's, the player must save Alice, threatened at any time by the Red Queen.

Each character that you play uses his special power to change the game: the Rabbit can speed up forward or accelerate time, the caterpillars Absolum stretches to reach inaccessible places.

Alice is a target that must not give an inch, or she will be taken by a Vortex or hit by a slap from a giant flower. Because, if we let Alice alone too long or standing still, she tends to be spotted or vanish.

The path you take to browse wonderland is full of bad guys, obstacles and puzzles to solve.

Do not expect a game of intense reflection. Every action you make is almost suggested by a subtitle. It's entertaining... for kids, don't forget! Not for adults.

The dialogues are, sometimes, very long. The game is on flash-drive wich requires an adjustment period.

While the design of the Wii version is highly developed, that of the DS is much more simplistic.

Very dark graphics throughout with touches of color, typically "Burton",  and validated by Tim Burton himself.

The landscapes are gothic, sometimes psychedelic. A sure choice of the creators, but it works very well!


A fun game, designed especialy for children. A special mention to the originality of the graphism.

Teachers must pay attention to these critical thoughts before exploring the game in the classroom.


Update: May 20, 2014, the Nintendo Wi-Fi Connection service for Nintendo DSi and Wii systems has been retired.

Online features of this game are no longer available after this date but this game still provides an entertaining experience in offline mode.

Alice in Wonderland, a video game for young kids at school ? by G-Souto is licensed under a Creative Commons Attribution-NonCommercial-ShareAlike 3.0 Unported License.