Schools : History of Europe : The Fall of Berlin Wall : resources 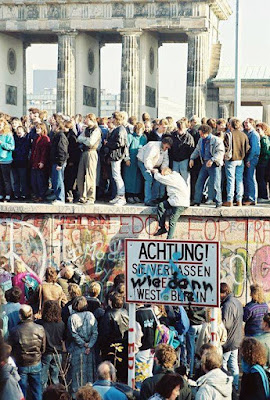 People atop the Berlin Wall near the Brandenburg Gate on 9 November 1989
by Sue Ream, CC BY-SA
https://www.europeana1989.eu/en/

“Tor auf!” (“Open the gate!”) roared the crowds gathered at the Berlin Wall on this evening in 1989. 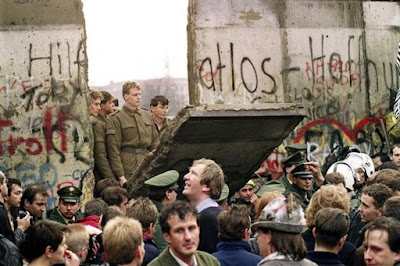 Berlin Wall fell o this day, the 9th November 1989. The wall stretched for 155 km through Berlin. But today, only about three kilometres of it still stands. Within a year of its collapse, Germany - divided after World War Two - was reunited.

Erected on August 13, 1961, the barbed wire and concrete edifice had long divided East and West Berlin. By the same token, its demolition triggered a series of events that led to the reunion of the Federal Republic of Germany and the German Democratic Republic.

Winds of change were blowing across Europe as new leadership in Russia, Poland, and Hungary had high hopes in East Germany for an end to 28 years of strict travel restrictions. During a government press conference, an official spokesman’s hasty statement gave reporters and TV viewers the mistaken impression that East Germany would be allowing free travel between East and West Berlin.

Today, the 9 November free Berlin and free world is celebrating the 30th anniversary of the Fall of Berlin Wall.

Today’s Doodle, created by Berlin-based guest artist Max Guther, celebrates the 30th anniversary of the fall of the Berlin Wall, a peaceful revolution that signaled the simultaneous end of the Cold War and the beginning of German reunification.

In 2004, Google published a video doodle commemorating the Anniversary of the Fall of Berlin Wall and its pieces around the world in 2014:

The Berlin Wall (German: Berliner Mauer, was a guarded concrete barrier that physically and ideologically divided Berlin from 1961 to 1989.

Construction of the Wall was commenced by the German Democratic Republic (GDR, East Germany) on 13 August 1961. The Wall cut off West Berlin from surrounding East Germany, including East Berlin.

The barrier included guard towers placed along large concrete walls, accompanied by a wide area (later known as the "death strip") that contained anti-vehicle trenches, "fakir beds" and other defenses.

The Eastern Bloc portrayed the Wall as protecting its population from fascist elements conspiring to prevent the "will of the people" in building a socialist state in East Germany.

In 1989, a series of revolutions in nearby Eastern Bloc countries – in Poland and Hungary in particular – caused a chain reaction in East Germany that ultimately resulted in the demise of the Wall.

After several weeks of civil unrest, the East German government announced on 9 November 1989 that all GDR citizens could visit West Germany and West Berlin. Crowds of East Germans crossed and climbed onto the Wall, joined by West Germans on the other side in a celebratory atmosphere.

Over the next few weeks, euphoric people and souvenir hunters chipped away parts of the Wall. The Brandenburg Gate in the Berlin Wall was opened on 22 December 1989.

The demolition of the Wall officially began on 13 June 1990 and was completed in November 1991. The "fall of the Berlin Wall" paved the way for German reunification, which formally took place on 3 October 1990. 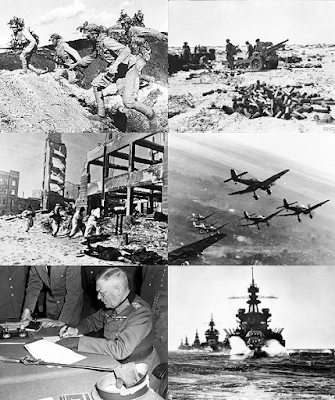 As World War II came to an end in 1945, a pair of Allied peace conferences at Yalta and Potsdam determined the fate of Germany’s territories.

They split the defeated nation into four “allied occupation zones”: The eastern part of the country went to the Soviet Union, while the western part went to the United States, Great Britain and (eventually) France.

After a decade of relative calm, tensions flared again in 1958. For the next three years, the Soviets, emboldened by the successful launch of the Sputnik satellite the year before and embarrassed by the seemingly endless flow of refugees from east to west (nearly 3 million since the end of the blockade, many of them young skilled workers such as doctors, teachers and engineers), blustered and made threats, while the Allies resisted. 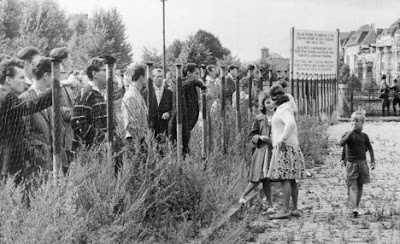 On August 12 Premier Khrushchev gave the East German government permission to stop the flow of emigrants by closing its border for good.
In just two weeks, the East German Army, police force and volunteer construction workers had complete a makeshift barbed wire and concrete block wall - the Berlin Wall - that divided one side of the city form other. 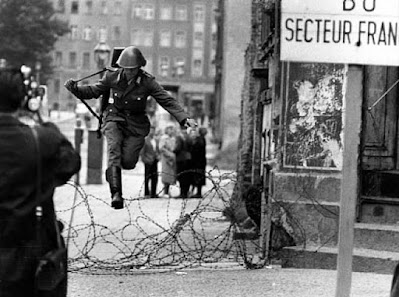 “The Leap into Freedom”, 1961
the soldat Conrad Schumann/ East Germany
credits: Peter Leibing
http://www.artnet.com/artists/
For 30 years, the Berlin Wall was the defining symbol of the Cold War, separating families and keeping the people from jobs and opportunity in the west. 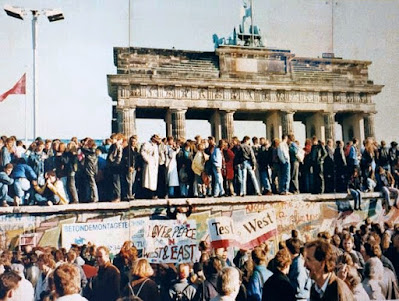 The Berlin Wall went up in the early hours of August 13, 1961, and was constantly modified and reinforced until it fell 28 years later, having cost the lives of at least 136 people who tried to cross it. 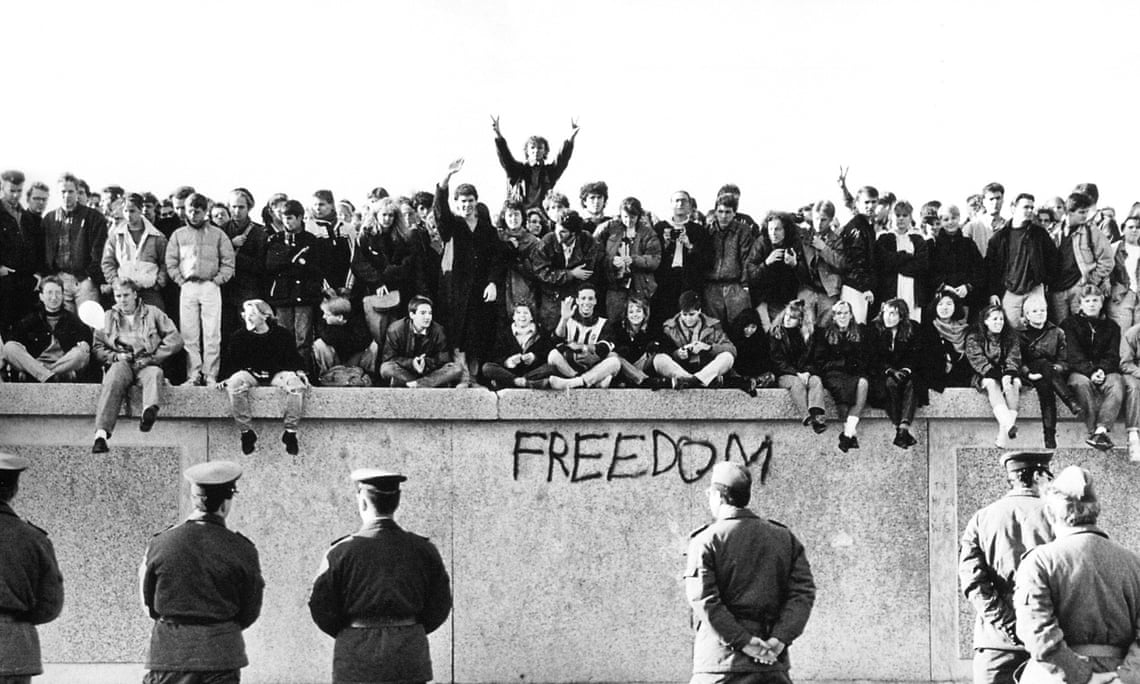 The Berlin Wall
credits: GDR Museum
via The Guardian

9 November 2019 marks the 30th anniversary of the fall of Berlin Wall. To honor this major anniversary, a series of special events and museum exhibitions were planned to take place throughout the city, focusing on the division of Germany and Berlin, the Cold War, and the peaceful revolution leading to reunification.


Berlin celebrates the 30th anniversary of the fall of the Berlin Wall with events and exhibitions dealing with its construction, the division of Berlin, the Cold War and the Peaceful Revolution of 1989.Read more about events here 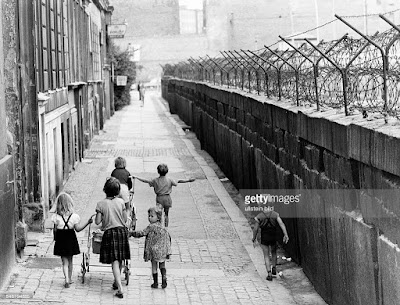 Children at the Berlin Wall on Sebastianstrasse, Berlin - Kreuzberg
around 1964
credits: Getty Images
https://www.gettyimages.com/
Education:
2019 marks the 30th anniversary of fall Berlin Wall. It would be interesting if teachers include this event into school curriculum, motivating students to understand the reasons of the Berlin Wall and its fall 30 years.

Of course, it must be important to remember the Holocaust, the World War II, the Cold War meaning to understand the causes.

The celebration could be a creative cross-curricular project to include into different curriculum to be exposed at the school library.

Targets : All levels
Teachers will adapt activities and sources to the level they are teaching.

a. Holocaust holograms: how survivors' stories live on through new technology: With survivors aging and dying, modern media provide a way to connect with youth. Read here

b. The Berlin Wall:  A Short History

Schools : History of Europe : The Fall of Berlin Wall by G-Souto is licensed under a Creative Commons Attribution-NonCommercial-NoDerivatives 4.0 International License.