Schools : Let your students give a try on visual music : Oskar Fischinger 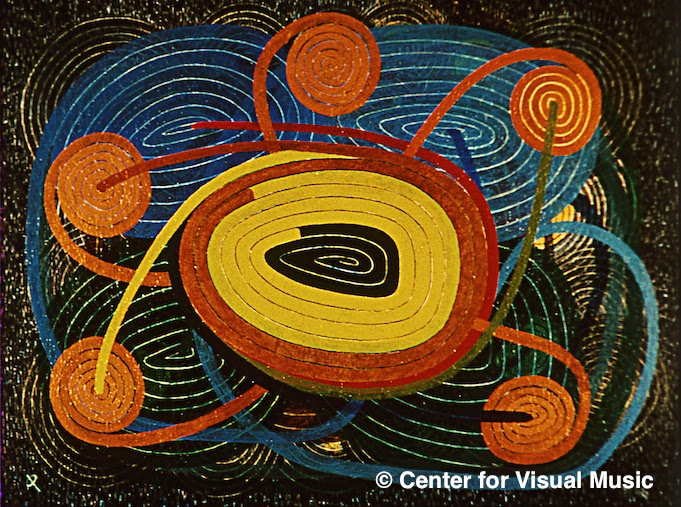 What a fantastic Doodle! Today, Google celebrates the 117th birthday of the influential filmmaker and visual artist Oskar Fischinger who died in 1967. He was known for pairing abstract visuals with music, long before computer graphics and music videos.

"In the world of design, Fischinger is a towering figure, especially in the areas of motion graphics and animation," wrote Google's Leon Hong, the doodler designer.

Kreise (excerpt) by Oskar Fischinger from CVM on Vimeo.

"Oskar Fischinger is the father of Visual Music. “Decades before computer graphics, before music videos, even before Fantasia (the 1940 version), there were the abstract animated films of Oskar Fischinger (1900-1967), master of ‘absolute’ or nonobjective filmmaking who created who created music and jazz.”
John Canemaker, New York Times
A master of motion and color, Fischinger spent months - sometimes years - planning and handcrafting his animations.
His films, most of which were made from the 1920s to 1940s, left Hong awed and puzzled - how could he make such magic without computers? 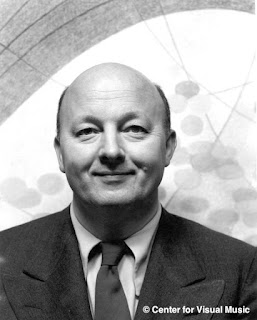 Some information:
Oscar Fischinger was born on the summer solstice in 1900 in Gelnhausen, Germany.
He originally chose music as a career, studying violin and organ building (which attracted him because it combined precise knowledge of technical processes with mathematical harmonic theory) before 1914.
Too young and unhealthy for war duty, he was trained in architectural drafting and tool design.
Around 1920 in Frankfurt, he met Dr. Bernhard Diebold at a literary club. Seeing Fischinger's abstract scroll sketches, Diebold urged Oskar to take up abstract filmmaking. In April 1921, Fischinger was thrilled by the first performance of Walther Ruttmann's Lichtspiel Opus 1 (an abstract film with a live musical score) and vowed to devote himself to absolute cinema, which could best combine his skills in music and graphic art. He resigned his engineer's job and moved to Munich to become a full-time filmmaker. 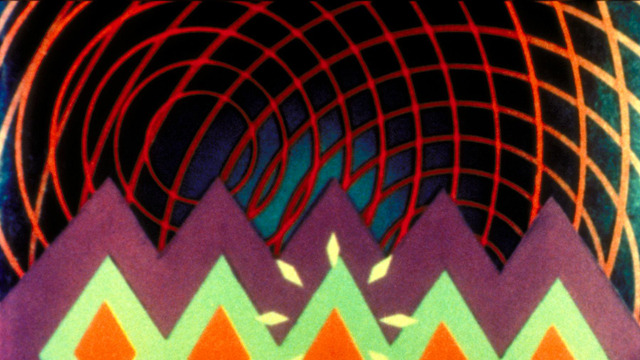 Fischinger's Allegreto detail
https://www.pinterest.com/
Fischinger was a major figure in the development of filmic abstraction and ‘visual music’.
Oskar Fischinger is the father of Visual Music. “Decades before computer graphics, before music videos, even before Fantasia (the 1940 version), there were the abstract animated films of Oskar Fischinger (1900-1967), master of ‘absolute’.

In 1926, the German filmmaker Oskar Fischinger pioneered one of the first immersive multimedia performances using abstract films, creating dynamic new possibilities for cinema as an art form.
Like László Moholy-Nagy, who presented Fischinger’s work at the Bauhaus, he developed a radical approach to abstraction working with light, space, time and movement.
Using dazzling colour and experimental animation techniques including unique wax experiments, Fischinger strove to push aside narrative and reduce cinema to pure plane, scale, motion, rhythm and colour, in search of the absolute. 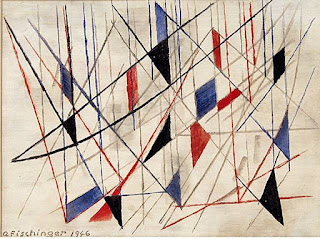 Oskar Fischinger
https://motiondesign.wordpress.com/
Although mostly known for his films, Fischinger was also a prolific painter, creating numerous works that capture the dramatic movement and feeling of his films within a single frame.
Unsatisfied with traditional media, he also invented a contraption, the Lumigraph, for generating fantastic chromatic displays with hand movements — a sort of optical painting in motion and a precursor to the interactive media and multi-touch games of today.
He emigrated to Los Angeles in 1936, where he lived until his death in 1967.  Fischinger died in 1967 but to this day many of his works are in the Center for Visual Music in Los Angeles.
From his office at Paramount Pictures in Hollywood, Fischinger produced entrancing animations synched to popular and classical music, and he contributed fantastical sequences to Walt Disney's Fantasia and Pinocchio.

Google is celebrating Oskar Fischinger with an interactive Doodle that lets us create our own audio-visual masterpieces in the abstract animator's distinctive style. Here a original digital resource to include into school curriculum.


Before inviting your students to explore the Doodle, introduce  Fischinger by the video below:


Now, ask your students to click on Google Doodle that leads to a page where they can visually compose music by selecting dots on an 11x16 grid.
Each dot represents a note, and they can select between four different  musical instruments.
The composition is played on loop. What an experience! They will love to do that. Composing their own music playing an instrument or another. Their choice and free inspiration.

After some random clicking, they will be able to put together something that will sound interesting. I'm sure! Students are creative, you will see.
If you want your students to be interested in music and Fischinger visual music, ask them to give a try. You will hear plenty of new graphic compositions during your lesson.
An immersive experience in experimental visual music that teachers should not waste as a good motivation to let students learn about music.
Don't forget to include into your lessons today and tomorrow. It's a awesome digital resource to include into school education.
Google Doodle team wanted you and students make our own visual music composition in honor of filmmaker and abstract animatorOskar Fischinger.

"Music is not limited to the world of sound. There exists a music of the visual world,"
Oskar Fischinger

Schools : Let yoour students give a try in visual music : Oskar Fischinger by G-Souto is licensed under a Creative Commons Attribution-NonCommercial-NoDerivatives 4.0 International License