When daisies pied and violets blue
And lady-smocks all silver-white
And cuckoo-buds of yellow hue
Do paint the meadows with delight, (...)

Oh! Yes! Spring is in the air! Today is the Vernal equinox which marks the beginning of Spring season in the Northern Hemisphere, where I live.
The daffodils are blooming, blossom is on the trees, birds are singing and Easter is coming, and lambing season will soon be getting underway.

This year, the vernal (or spring) equinox takes place on Monday, March 20, 10:29 (GMT).
After this point, the days will get longer and the nights will get shorter until the summer solstice on June 21, when the pattern will reverse.
Spring equinox the day and night are equal in length. The word 'equinox' comes from the Latin for equal and night. Almost everywhere in the world today, nighttime and daytime are each 12 hours.

We use the equinox to mark the change of seasons, as the balance of light shifts to make for longer days or nights.

Google is celebrating with lovely Doodles (I love Doodles as you know) the arrival of spring in the Northern Hemisphere and fall in the Southern Hemisphere.

For users living in the north of the equator, Google's homepage features an animated short doodle starring a mouse waking up to grab a yellow flower from outside to display inside his underground home.

For those living in the south of the equator, Google's homepage display's a similar animated short doodle with the mouse now venturing outside to jump into a pile of leaves before returning home to enjoy a warm cup of tea.
"We use the equinox to mark the change of seasons, as the balance of light shifts to make for longer days or nights. It usually means that it's time to hunker down for colder seasons, or time to rise and shine for warmer ones, as in the case of our furry friend the mouse!"
Google doodle team 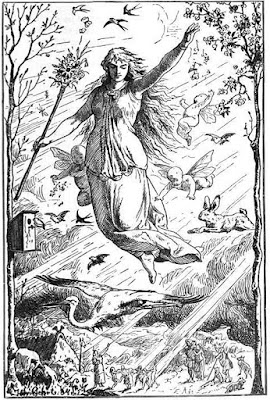 Ostara (1884) by Johannes Gehrts
https://en.wikipedia.org/
For Pagans and Druids, the spring equinox is a time to celebrate the second Wheel of the Year – a series of four festivals celebrated annually. It is the time of the ancient Saxon goddess Eostre, who represents new beginnings and fertility.

Stonehenge, one of the wonders of the world and the best-known prehistoric monument in Europe, is open from the start of the equinox until 8:30am, to allow Druids and Pagans to gather and see the sun rise above the ancient stones. 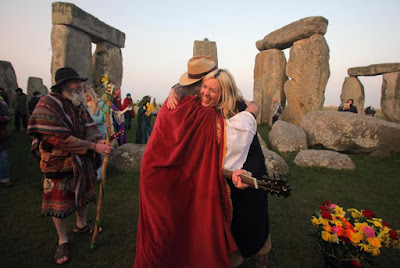 The goddess flies through the heavens surrounded by Roman-inspired putti, beams of light, and animals. Germanic people look up at the goddess from the realm below.

Some people argue that the Ostara tradition comes from ancient Celtic and Saxon spring holidays – which were later merged with the Christian festival of Easter.
Others reckon these neopagan holidays are modern creations.
Whichever the truth, many religions celebrate holidays at the time of the year, including the Hindu Holi festival of colors, Jewish Purim, Sikh Hola Mohalla and Christian Easter.

The 2017 vernal equinox arrived on March 20 at 10:29 UTC, 10:29 GMT. In the Northern Hemisphere, we’re enjoying earlier sunrises, later sunsets, softer winds, sprouting plants. Meanwhile, the opposite season, later sunrises, earlier sunset, chillier winds, dry and falling leaves, south of the equator.
For all of us, the moon will be at the last quarter phase. Last quarter moon comes on March 20, 2017. That’s the day of the 2017 vernal equinox.
A last quarter moon looks half-illuminated. It rises around midnight, appears at its highest in the sky at dawn, and sets around noon.
Fun time to see a last quarter moon: just after it rises, shortly after midnight. Then the lighted portion points downward, to the sun below your feet. Great time to think of yourself in the three-dimensional world of outer space!

And of course to visit NASA website Celestial Geometry: Equinoxes and Eclipses will be very interesting to learn more about the equinoxes.
Children's books: 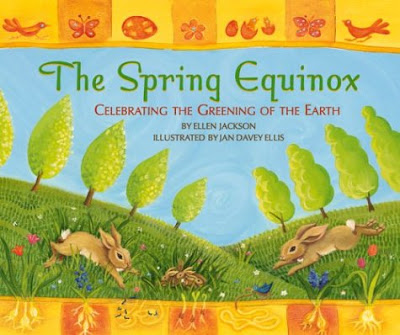 A non-fiction exploration of the Spring Equinox and vernal celebrations throughout the world.
At the end there is a story of Ostara, the Anglo-Saxon goddess of the dawn and springtime, and a handful of traditional activities, crafts, and recipes.
Age: +4 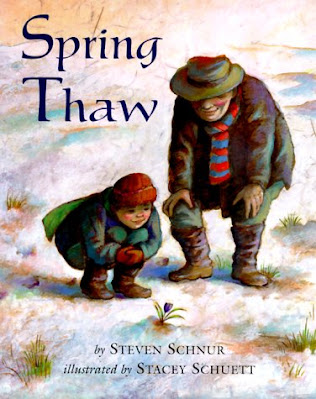 Spring Thaw
Steven Schnur
illustration Stacey Schuett
https://www.amazon.com/
A lyrical exploration of the arrival of spring on a farm. Highly descriptive language highlights the small, subtle signs that spring is nearing. Unlike many season books, there is insight into the human experience and preparations for the awakening of the earth.  Painterly, impasto illustrations  reveal the rural world alluded to in the text.
Age: +3 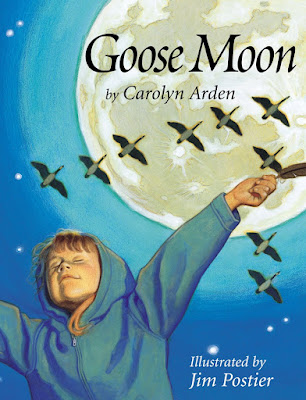 Goose Moon
Carolyn Arden
illustration: Jim Postier
https://www.amazon.com/
A young girl has grown tired of the quiet, indoor winter entertainment and is eager for the spring. One night, her grandfather wakes her to see that the geese have returned from their winter migration. A heart-warming, inter-generational tale that celebrates the quiet, subtle signs nature gives.
Age: +3 Do you need more interesting facts to share with your students ? Spring time, equinoxes, and traditions?

Students may do some research about themes around Spring equinox. Sciences and Literature two school curricula that can join on trans-curricular project (activities and so).
For Celtic Literature

Teachers must adapt the activities to the levels they are teaching.

Wishing all a Happy Spring time!

Schools : Spring equinox is here ! by G-Souto is licensed under a Creative Commons Attribution-NonCommercial-NoDerivatives 4.0 International License.