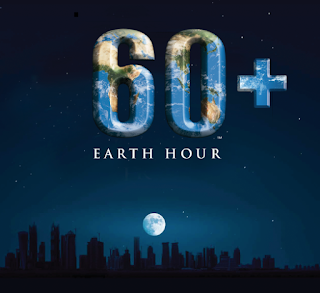 Today, Saturday 23 March, at 8:30 PM (local time), lights will switch off around the globe for Earth Hour and people will commit to actions that go beyond the hour.

The simple idea of switching off lights for an hour to drive action on climate change began in Australia in 2007.

"Born out of a hope that we could mobilize people to take action on climate change, Earth Hour now inspires a global community of millions of people in 7,001 cities and towns across 152 countries and territories to switch lights off for an hour as a massive show of concern for the environment."

It may only be symbolic, bu watching iconic buildings such as the Eiffel Tower and Sydney Opera House be plunged into darkness sends a powerful message. 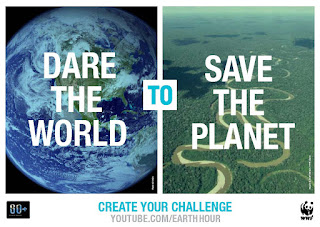 In 2012, more than 7,000 cities and towns in 152 countries worldwide will switch off their lights for Earth Hour, making it the largest climate campaign ever!

In Portugal, more than 90 cities and towns and 500 monuments switched off their lights such as Mosteiro dos Jerónimos, Cristo-Rei and Convento de Cristo.

This year, follow the Timeline (country by country) for Earth Hour 2013 here

As you know, I have been out in Brussels to participate at the European Forum Learning Futures and Innovaton. I had to prepare my presentation the last two weeks before. And I came home on 20 March.

So, it has been difficult to me to write three posts in three days in a row. I already wrote that blogging is for inspire teachers when I have the time between work.

And my ex-students prepared a post on their blog Hora do Planeta 2013. They are amazing! They continue their blog even they left school. We only met on the internet now.

Please search for some activities if you like. But I am sure that you prepared your lessons carefully and your students are well motivated to dare to save the Planet, today 8:30-9:00PM (local time).

Dare the World to Save the Planet! I will dare !

And today, Earth Hour by G-Souto is licensed under a Creative Commons Attribution-NonCommercial-ShareAlike 3.0 Unported License.
Posted by G-Souto at 5:37 PM