We Are The People We’ve Been Waiting For


We Are The People We've Been Waiting For from James Cross on Vimeo.

"Some children don't respond to academic environments, how can we ensure that we keep them engaged with education?"

The world is changing quickly, but the school is not changing! Or if it's changing, it  is because some innovative teachers understood that there are many talents and paths to success in school. The education system is not currently meeting the needs of all young people. Perhaps those few innovative and creative teachers are meeting the needs of the new generations, the Millenial learners.

Designed in the 19th century, our education systems are not preparing young people for the challenges that lie ahead of them. Learning is based on an outdated curriculum, with too much emphasis on testing.


We Are The People We’ve Been Waiting For, is a film by Caroline Rowland and based on a idea of  Lord David Puttnam and Sir Michael Barber.

We Are the People We've Been Waiting For, which was inspired and guided by Lord Puttnam, focuses on the educational experiences of five young people from Swindon (UK).

The premiere of We Are The People We've Been Waiting For took place on November 2009 in Leicester Square, London.

The producer Caroline Rowland describes how the film came about: "We wanted to bring the myriad of opinions about education to life and decided to give a group of young people their voice and then add analytical comment." The aim of the film, says Puttnam, is to focus on "what's being done well, what needs to change, and what can be learned from best practice in schools all over the world."


It follows the experiences of five Swindon-based teenagers and shows how we need to have a radical transformation of the education system.

The documentary explores the educational system in United Kingdom and analises  the possibilities for a radical transformation in learning with a creative learning for new students, the Millenials learners.

The film shows how the system is particularly hard on children, like Harflett, who do not fit into the mainstream. Harflett always found reading and writing difficult and, as a result, hated school. His experience, as the film testifies, is a common one.

"We label young people, people who are enormously talented and motivated, as dysfunctional because they don't quite fit in."

"We believe that everyone should have the opportunity to realise their talent in school and that there should be many paths to success. It's simply not good enough that young people are being labelled as a 'poor' or 'average' student because their potential is not being fulfilled through traditional academic teaching."

The film presents a compelling call for a fresh approach, including more practical and vocational learning options in schools.

Introducing technology in the curricula, digital resources, games and web 2.0 are important and serious goals in the 21th century focus on the changing face of Education to motivate students.

Teachind and learning is no more listening quietly the educator in a static knowledge. Teaching and learning is students 'doing'with the tutoring of a teacher|facilitator.

This was true for Amy Scott, 17. She struggled at her school in Swindon and found the pressure of exams very stressful. It was only when she started doing a hairdressing course at college that she realised her true creativity. "It's nice being creative, and when you've got the finished product you think 'oh wow' and you can be proud of yourself and everyone says how nice it is and that makes you feel good." 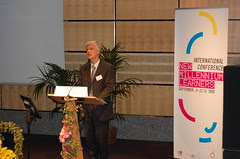 You do remember my post about New Millenial Learners Conference where many orators presented their overview about changing policies and programs.

Researchers presented their investigations and opened an interesting debate with all participants, sharing ideas and experiences about "the range of skills and competencies that young students will be required to have in the knowledge society of the 21st Century".

We need to prepare students to the real world, to refocus on practical and innovative learning, on creativity, giving choices that show how training has economic benefits, both for society and for the individual.
Eve Gordon, principal of West Met high school, shows from the successful achievements of her school how to do this: "People learn best when they are intrinsically motivated, when they're learning about something that they chose, and when they do mind and hand learning together."
This is the message of the film: we need to ensure our education system provides the right support and opportunities for every young person to develop their individual talents, and to make sure every young person leaves school feeling self-confident and proud of what they have achieved.

"These bright young people are probably the only natural resource that is going to left in the UK within the next 20 years. We have to bring these young people on and make the most of them."
Martin Stephen, high master at St Paul's school

We Are The People We've Been Waiting For by G-Souto is licensed under a Creative Commons Attribution-NonCommercial-ShareAlike 3.0 Unported License.

References:
We Are The People We've Been Waiting For
http://www.wearethepeoplemovie.com/
Welcome to the real world
http://www.guardian.co.uk/we-are-the-people/welcome-to-the-real-world