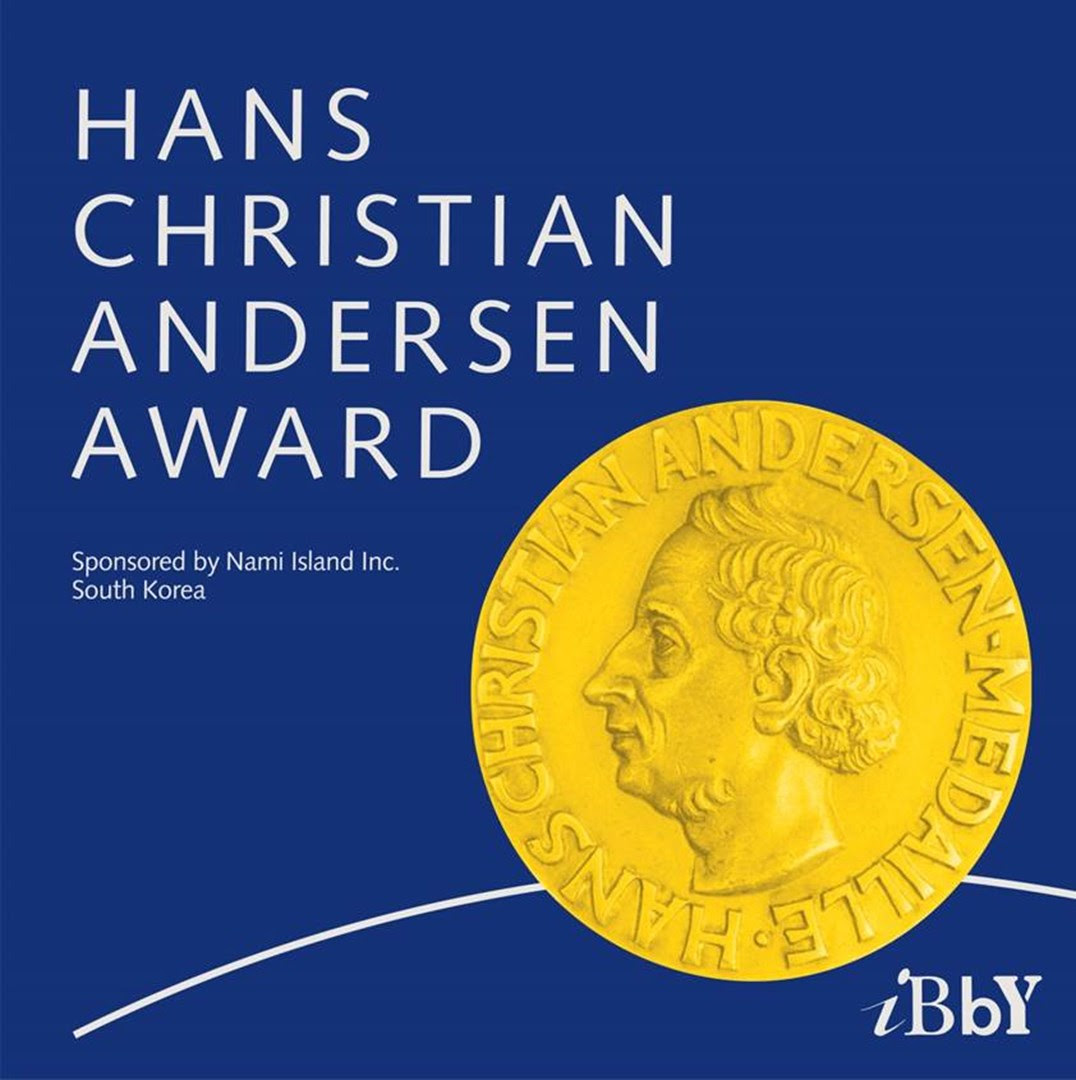 The Hans Christian Andersen Award is the highest international recognition given to an author and an illustrator of children's books. Given every other year by IBBY, the Hans Christian Andersen Awards recognize lifelong achievement and are presented to an author and an illustrator whose complete works have made an important, lasting contribution to children's literature.

The award seeks to recognize authors and illustrators whose work represents an "important, lasting contribution to children's literature." J.K.Rowling was the writer winner in 2010. 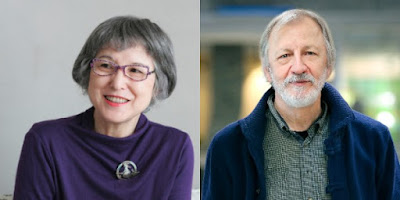 The winners of this year’s Hans Christian Andersen Awards - considered the Nobel Prize for children’s literature - were announced on 26 March at the Bologna Children’s Book Fair by Patricia Aldana, chair of the award jury, on behalf of the International Board on Books for Young People.

Japanese author Eiko Kadono received the prize for writing, and Russian artist Igor Oleynikov was awarded the honor for illustration. 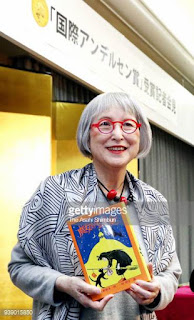 "There is an ineffable charm, compassion, and élan in the work of this great Japanese author.  Whether in her many marvellous and funny picture books, or her great series of novels about the witch Kiki or her novel set during World War II about a brave girl who must walk through a terrifying tunnel of trees to get to school, Kadono’s books are always surprising, engaging, and empowering.  And almost always fun. And always life affirming. 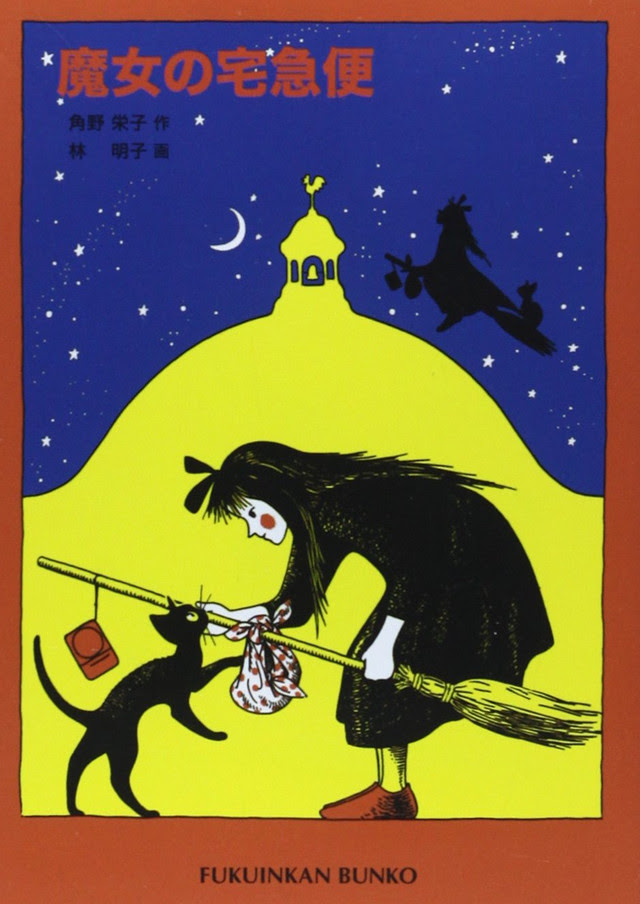 
While delivering packages on her broomstick, Kiki, a charming young witch, and Jiji, her cynical cat, learn important lessons in life, friendship, and trust that help Kiki to realize her full potential.

Kiki is a young 13-year-old witch living in a village where her mother is the resident herbalist. Traditionally, witches live alone for a year when they reach the age of 13. One night, Kiki takes off for the big city with her best friend Jiji, a talkative black cat. (...)


The original Kiki's Delivery Service novel was published in Japan in 1985 by Fukuinkan Shoten. In a first English translation of the Japanese book that was made into a full-length animated feature by Disney. Simultaneous.

"Although Kadono has travelled widely throughout the world, her stories are deeply rooted in Japan and show us a Japan that is filled with all kinds of unexpected people." 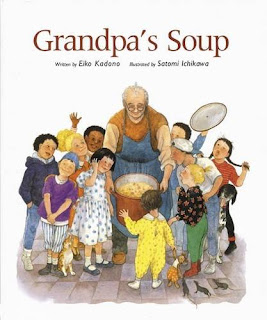 Grandpa's Soup
Eiko Kadono
https://www.amazon.com/
When Grandma dies, Grandpa is too sad to do anything. All day long, day after day, he sits by himself in his house. Then, one day, Grandpa wakes up and decides to try to make the soup his wife used to make for him. Though each batch he makes is bigger and better than the last, Grandpa hardly gets a taste of it. Unexpected visitors, hungry for soup, keep arriving at his door. Soon, Grandpa discovers that sharing with his new friends is the best cure for his loneliness. 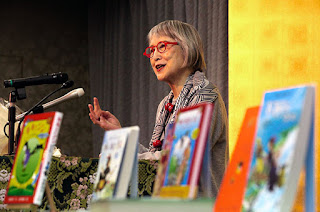 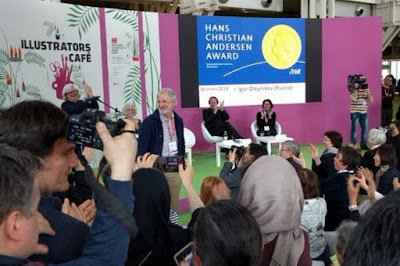 Igor Oleynikov, Russian illustrator
Hans Christian Andersen Award 2018
credits: Hannah Johnson
https://publishingperspectives.com/2018/
"This exceptional illustrator can bring the page alive in a way that must be the envy of his peers. Coming from an early career as an animator, Oleynikov is a master of design and composition." 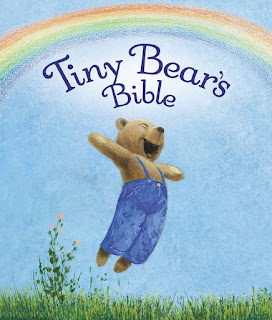 "Furthermore, he brings an extraordinary cast of characters to life – from young boys and girls, to witches and giants, to wolves and sharks, to fairies and trolls, to Joshua and Ruth from the Old Testament, to even a brilliant tiny mouse who goes to Harvard!  Though he claims not to like illustrating ‘cute’ children, he is more than capable of creating beauty – in his landscapes and in his characters." Mahalia Mouse Goes to College
John LithGow
illustrator: Igor Oleynikov
http://www.simonandschuster.com/books/
Mahalia Mouse and her family live underneath Dunster House, an old Harvard dormitory. Foraging for food for her younger brothers and sisters, Mahalia gets trapped in a backpack and then finds herself inside a classroom far from home. Mahalia, intrigued by the lecture, starts attending classes and soon becomes a full-time student - all the while wondering about the fate of her family. But when graduation day finally arrives, Mahalia has a wonderful surprise waiting for her.

Mahalia Mouse Goes to College
John LithGow
illustrator: Igor Oleynikov
http://d28hgpri8am2if.cloudfront.net/
Written as part of his keynote address at Harvard's commencement, this latest book from John Lithgow, illustrated by Igor Oleynikov incorporates includes a CD of him reading the text at the commencement. Mahalia's story has an inspiring message for graduates or anyone whose success is worthy of celebration. 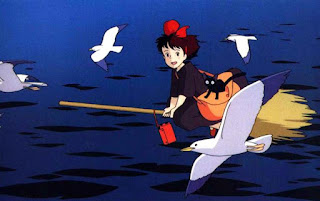 The story is based on Eiko Kadono's novel of the same title. It was the first major success of Studio Ghibli.
Miyazaki made Kiki a heart-warming story of a little girl, about her struggle of growth and independence.

Kiki's Delivered Service
Hayao Miyazaki, 1989
http://www.onlineghibli.com/kiki/
One may be surprised that a movie can be built on no antagonist. Even so, it is still highly entertaining and enjoyable, with values and meanings that are by no means less than its predecessors.

Soundtrack by Joe Hisaishi on iTunes.

A live-action film adaptation with direction by Takashi Shimizu was also published in 2014.
Disney released an English language version in 1998. The look of the new live-action film is heavily influenced by Miyazaki’s designs and storytelling.

Directed by Takashi Shimizu, “Kiki” is portrayed by actress Shoshiba Fuka; Kotobuki Minako is the voice of Kiki’s  black cat, Jiji.
The movie is set in the seaside town Koriko which the main character Kiki played by actress Fuka Koshiba chooses as her training location; the movie describes the life and delivery work of a little girl. The figure of the black cat Jiji, voiced acted by Minako Kotobuki, was also unveiled for the first time. 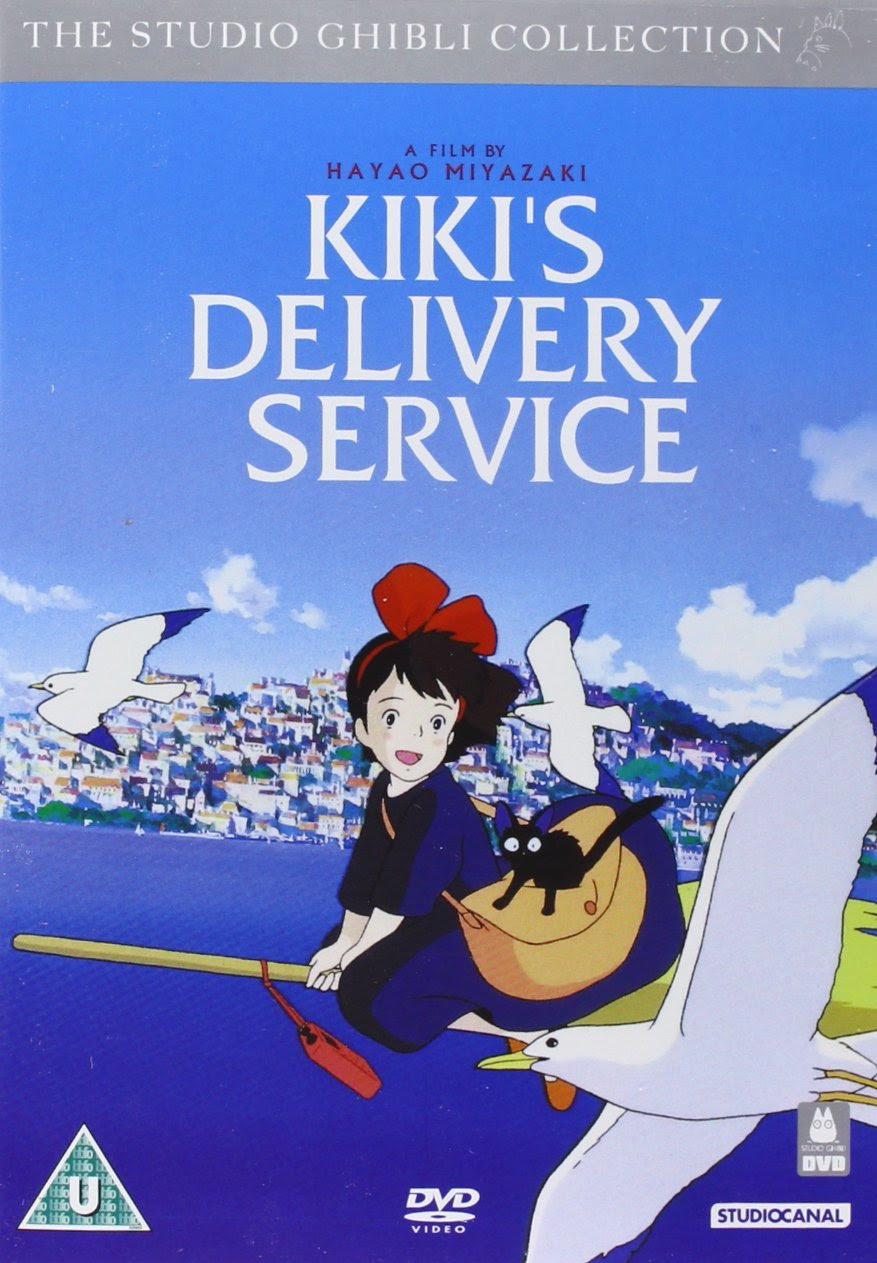 Following the success of the anime, Kadono wrote five more volumes from 1993-2009, charting the heroine’s passage into womanhood.

The screenplay by Shimizu and Satoko Okudera stitches together new plots from Kadono’s later books (mostly from the second volume, “Kiki and Her New Magic”), and it retains the formless, episodic nature of the author’s writing. 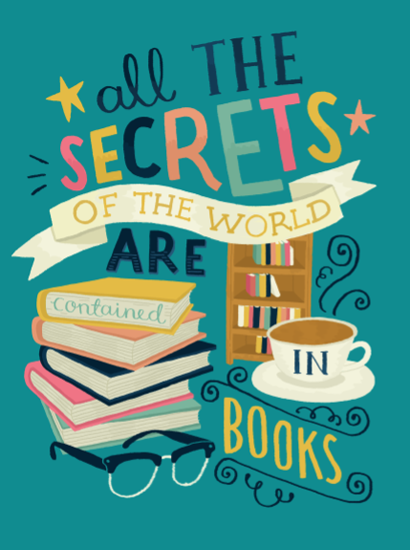 My last posts continue to talk about books. It's impossible not to mentionne all the news about children's books in these last days. And of course, I love books. My master in Humanities reminds me how books, and children's booksheralding magic and values.

Students have a lot technology. They are immersed on smartphones - you know I'm not against. On the contrary. They born into technology time. I write often about education and technology. It's imperative to use technology in our lessons.

But books are special. It's the humanities values they need to live into so many technology.

These two winners, writer Eiko Kadono and illustrator Igor Oleynikov will captivate your young students, future writers or illustrators - who knows -stimulating their imagination and "offering creative solutions to obstacles that we will find along the way."

The love of books can give rise to a new generation of poets, writers or illustrators by reading in Languages and  Arts school curriculum.

The inspiration for students will come this from Kadono and Oleyniko children’s novels and illustrations among other great writers and illustrators.

"If I lose my magic, that means I've lost absolutely everything."